I just finished my second piece for the Tiny Pricks Project. If you don't know what I'm talking about, please scroll down to my last post which will give you all the details.

This quote was directly from his Twitter feed a couple of weeks ago and is so typical of his rants and  his being more concerned about crowd size than anything else.

I was happier with the lettering on this one. I originally had printed the words on graph paper, then transferred to fabric. After stitching a few words I realized that my spacing was very uneven so rather than beating my head against the wall I thought I would get much better results if I used the computer to print the words. Why hadn't I thought of that before? I chose Helvetica Neue pt. 38 since it was the same size as my hand printing and looked very much the same.

I used a vintage heavy linen luncheon napkin and two strands of embroidery floss. So much better than my last one on a thin linen hanky. My carry-overs do not show on the front, a big plus. I used three strands for Fake News and the Twitter bird. 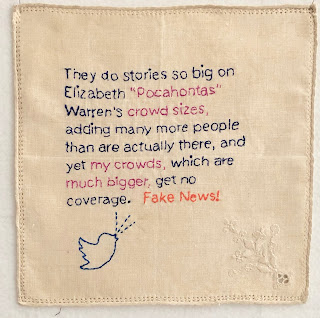 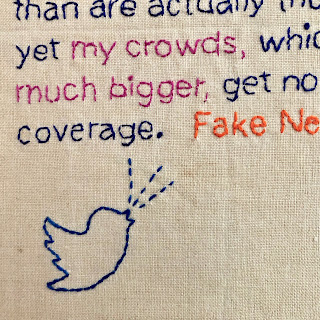 I think this is my last one, although it was fun and cathartic to work on. Has anyone else been inspired to join me in this stitched protest?

I will be joining up with Off the Wall Friday.

Certainly tempted to join in. If I were to do one this week it would be on Sharpiegate. I simply have other projects I'm currently working on. So, have stuck to those. I do like the lessons learned segment of your post. Since my handwriting is atrocious I've used computer generated print whenever I need text for a visual project. The extra strand of floss help your words stand out.

I love these. I've been considering doing one, but life keeps getting in the way. I should just make it a daily stitching project and I would probably get it done.