This past weekend I spent in Athens, OH with three friends attending the opening of Quilt National, the Holy Grail, the Mount Everest, the US Open, the Grand National, the creme de la creme of art quilters everywhere.  I have been several times before and it is always an awe inspiring event for me.  This year there were 85 quilts chosen from the 850 entered, sort of like trying to get into Harvard. I have only entered twice and was rejected twice.  I spoke to Charlotte Ziebarth, who finally got in this year after 9 rejections.  That's 18 years of trying since it is only held every other year.  She got the "Persistence Pays" award for the person who finally gets in after trying the longest.

We usually go in the middle of summer and are in the gallery almost all by ourselves. I wondered if we would enjoy it as much with the throngs of people who were in attendance. We did!  It was wonderful talking to the artists and hearing the inside information on how or why they made their piece. We were also there for the SAQA conference where we got to hear from the jurors and their insight as to why they chose what they did.  And we had plenty of time between talks to go back and look at the art up close and personal.

I didn't think that photos were allowed so I didn't even bring a camera, but people were snapping away left and right. So I got out my iPhone and joined the crowd.  Since I had purchased the catalog, I mostly took details.  My FiberWorks group's challenge for this year is "texture" so I was interested to see how other artists achieved that goal and that is mostly what I took. 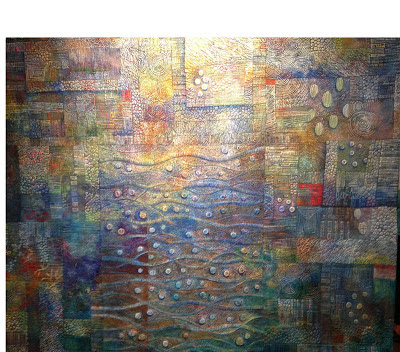 I was fascinated by Deirdre Adam's quilt, Tracings III, which was painted after it was quilted.  This is a technique I had tried before and now after seeing hers I know I want to do some more. 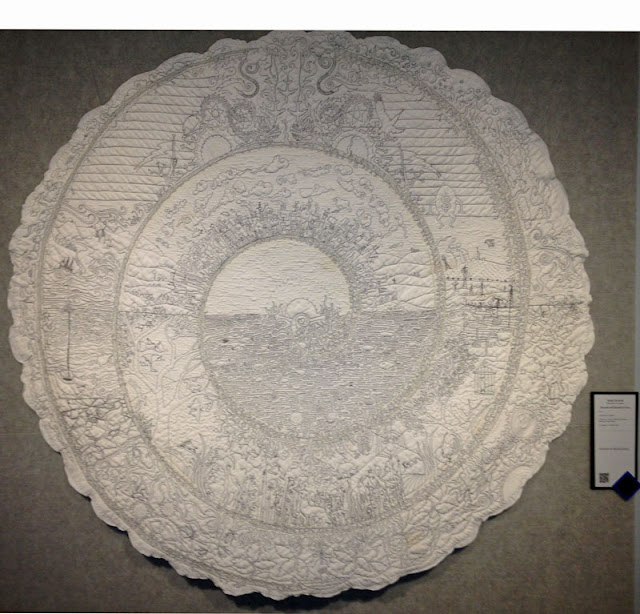 I was mesmerized by Paula Kovarik's  "Round and Round It Goes" on which she did the most incredible stitching on a round cotton tablecloth. 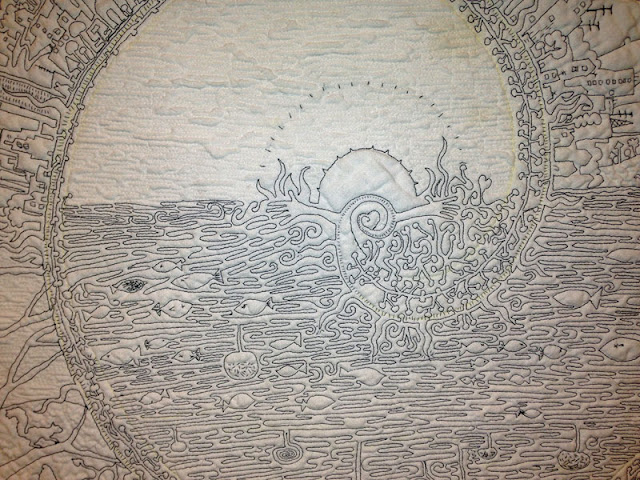 I took several detail shots.  It was one of those quilts that you could look at all day and keep discovering new things. What an imagination and impeccable stitching! 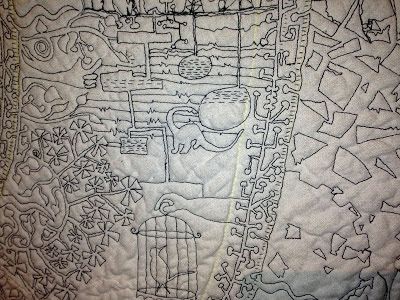 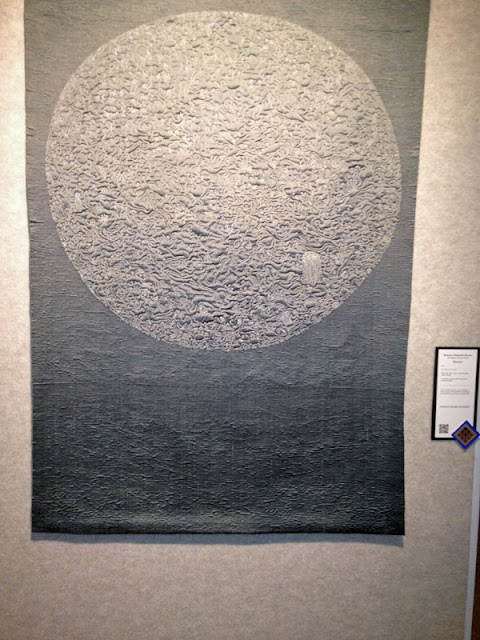 Brienne Elizabeth Brown's, Moonset was of a similar vein in which she did fabulous stitching on silk. the silk was the same color throughout, but she changed thread color very effectively to demarcate the circle and the band below. 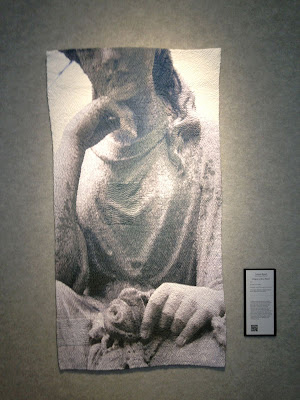 The texture in Luanne Rimel's "Enigma with a Flower" was brought about by hand stitching. 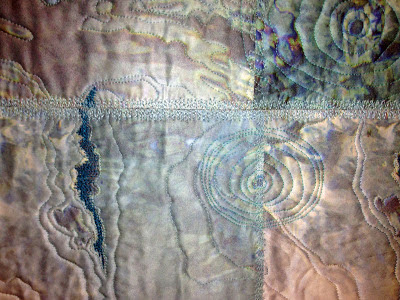 I only have a detail shot of Charlotte Ziebarth's "Reverberations: Yellowstone Waters". What wonderful texture! 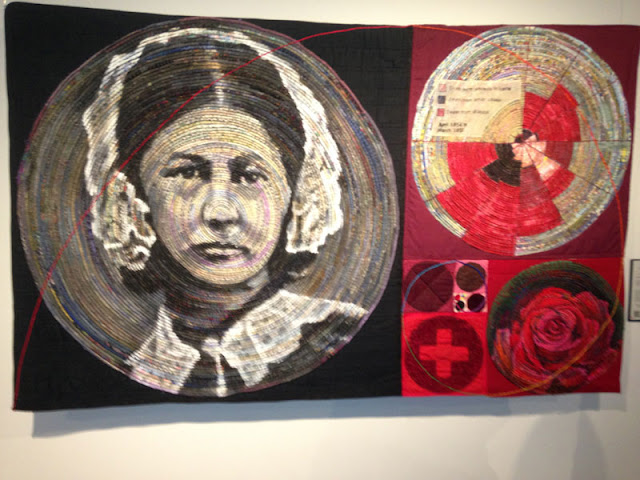 Shin-heee Chin's "Florence Nightingale" won "The Most Innovative Use of the Medium" award.  It was made from coiled fabric and paper tubing using basket making techniques. It was amazing! 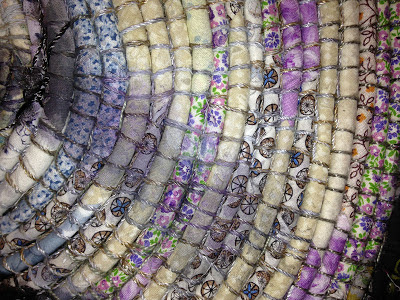 I don't have a full picture of this Best of Show winner by Brooke A. Atherton, "Springfield", which was texture to the extreme.  She used maps, glass, found objects and much much more to achieve her goal.  It was a very large quilt at 97 inches wide. There was so much going on, that I could have taken dozens of pictures.  I just show you two here.

I was going to show you some more, but I'm getting tired of writing and you are probably getting tired of reading.  Suffice it to say that it was a wonderful show.  Get the catalog to see all the quilts.  Of course it's nothing like seeing it in person and QN is open all summer.  Go if you can. 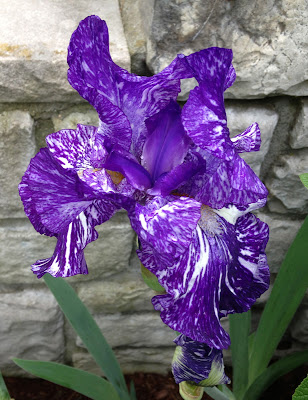 In my ice dyeing that I've done over the past few days I did a few garments, too.  None of them turned out exactly as I thought, but some of them are not too bad. 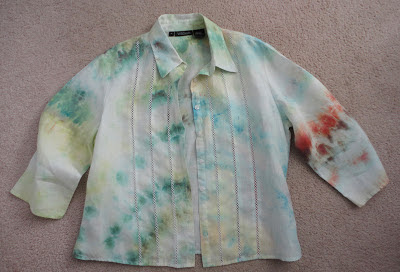 This was an old linen blouse that I was ready to give away.  It's very boxy and not really my style, but I thought I could wear it as a jacket , open over a tank. I wish it didn't have that orange splotch on the left sleeve, but some of that color is on the back, too.

This was a white silk charmeuse scarf and I rather like the results. This was in the same batch as the linen shirt above. I did another pale green Thai silk that was quite ugly. 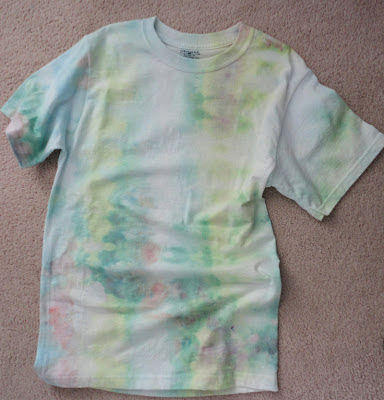 This was a cheap white T-shirt that I had purchased to do some surface design.  I never did, so I dyed it instead.  I do not like this neckline.  Maybe I'll cut it off and try to do something with it.  I did another one that I didn't like at all. They will make good gardening, dyeing, painting shirts.

This was a new pale pink shirt that I purchased at Good Will just for this purpose.  I don't know if it's too hippy-dippy for me.  I'm teaching a dyeing workshop this summer. Perhaps I'll wear it then.
Posted by Norma Schlager at 7:21 PM 5 comments:

On the second Friday of the month my FiberWorks group meets at the Brookfield Craft Center where one of our members demonstrates something of interest. Last Friday Andrea showed how to ice dye.  I had done quite a bit of snow dyeing a couple of winters ago when we had an impressive amount of snow, but this was done with bags of ice from the grocery store. The technique is basically the same, the difference being that with snow dyeing your dye powders are mixed with water and put on the snow as a dye solution.  In ice dyeing you work with the dry powders.

After soaking your fabric in a soda ash solution, you put it in the bottom of a container, crumpled or twisted as you wish, then cover it with a layer of ice.  Then you sprinkle small amounts of Procion dye powders on top of the ice.  The ice acts as a resist and lets the dye hit the fabric at different times  Leave it in the bucket for 24 hours, then rinse, wash in hot water and Synthropol, dry and iron.

We had an absolutely perfect day for the project.  We had a nice room do do our fabric manipulation, then a good outdoor space to deal with the ice and dyes.  Andrea was a great teacher and everyone had a lot of fun.  I did some more on my own when I got home and then some more yesterday.

Some were more successful than others.  Here are some that I liked.


The next three pieces were done with each one using just one black.  Who knew that all these beautiful colors were hiding in there? If I had used them as regular dyes where you mix them with water, I would have made three slightly different shades of black, because there are different concentrations of the mixing colors.  Doing it this way with dry powders, they are quite similar. 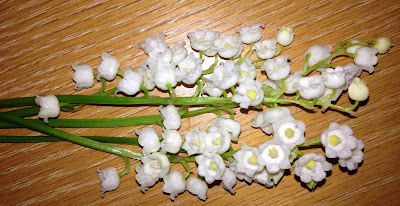 I picked these few sprigs of Lily of the Valley this morning and it brought back so many memories.  My mother always told us that she had carried them in her bridal bouquet and my Grandma Jenny had a big patch in the garden behind her house.  I loved to pick them and bury my nose in the sublime fragrance. I still love the aroma and wish I could find a perfume just like it.  So I'm remembering my Mother and my grandmothers on this Mother's Day. 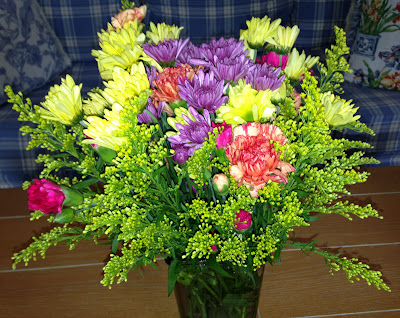 This beautiful bouquet from my son was delivered this morning. Since he lives on the other side of the country we rarely get to spend Mother's Day together, but I have fond memories of all the Mother's Days we did spend together and all the wonderful days between.

To all the mothers, stepmothers, and grandmothers out there I wish you all a Happy Mother's Day!

After those two long blogs that I did earlier in the week for my blog and the FANE blog, I needed to take a break.  Here I am going to show you some more pictures from the NSQG show.

These next three are from the Black and White Challenge at the guild show. These were hung high, so they all look out of square, which they weren't.


These next are from the Deck of Cards challenge.

Next are a few of my favorites in the judged section.

Posted by Norma Schlager at 2:50 PM No comments:

As mentioned in the last post I had two shows this past weekend.  In the Northern Star Quilter's Guild show I had seven items  Three of them were in the judged section and I was very pleased to get three ribbons for the three quilts I had entered. 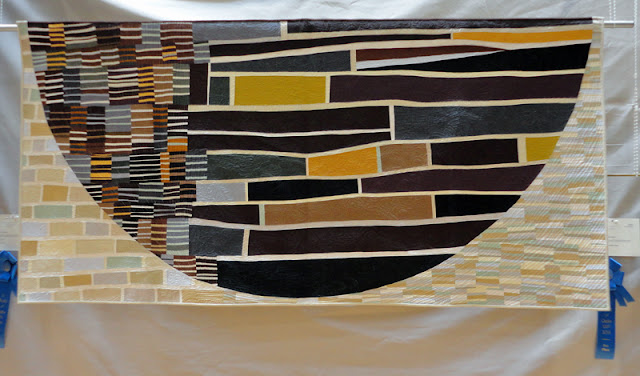 I got a first for Brown Planet, a Collaboration, the quilt on which I collaborated with Katy Loomis.  According to the show rules I had to enter it in the group quilt category. This was its maiden voyage and it has encouraged me to enter it into the big judged show in Houston this fall. I heard many favorable comments.  There is a ton of quilting on it, which doesn't show in the picture. 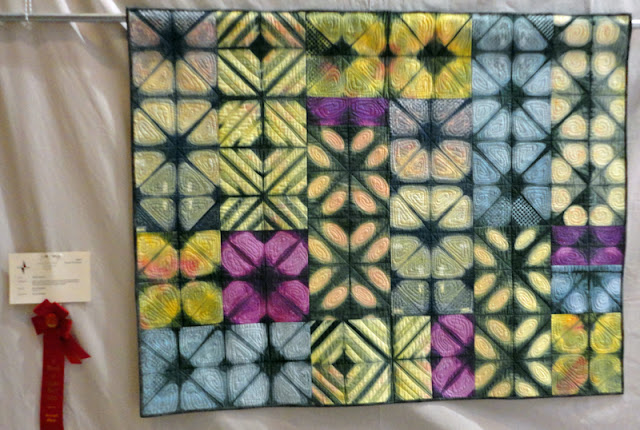 I got a second for Itajime Surprise, which was entered into the special Techniques category.  I was happy with the way the lighting hit it to show off all the quilting. 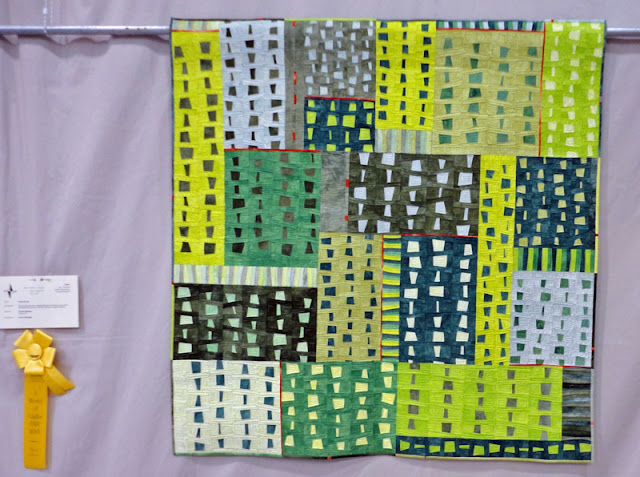 Emerald City was somehow entered into the Pictorial category.  I think it was my mistake, but I got a third place anyway against all those quilts that were definitely pictorial.  I thought I had entered this into Art Abstract. 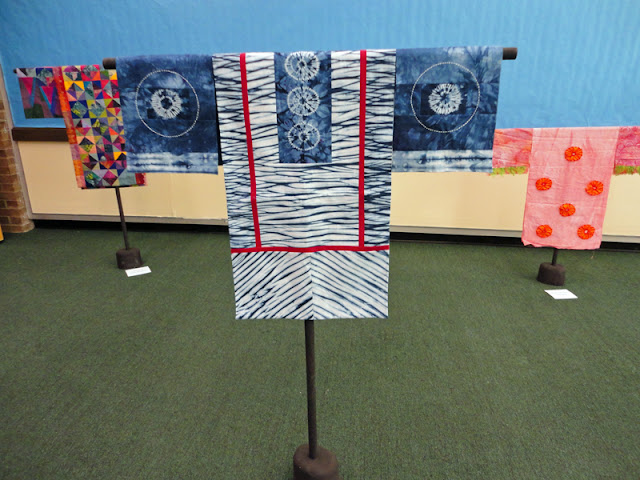 My FANE group put on this fabulous display of kimono inspired quits. Here is a picture of mine, Indigo Shibori. You can see all of the kimonos and more about the exhibit at the FANE blog.  Just click here. 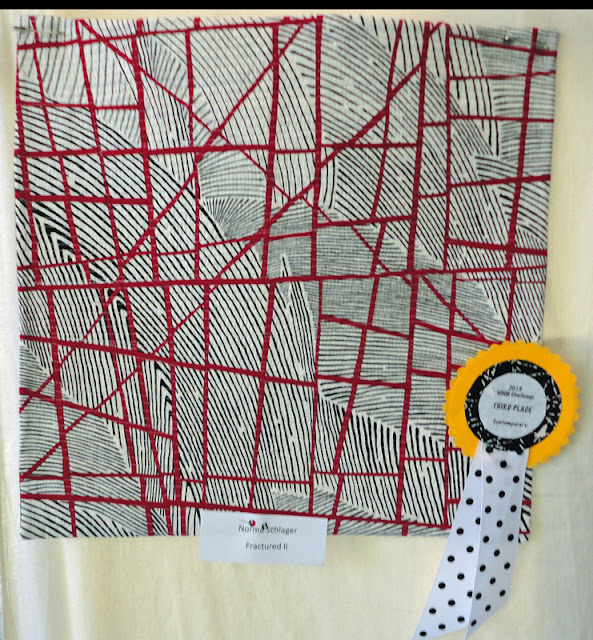 Here is my little quilt Fractured II from the Back and White Plus One challenge, in which I won a third place and got this cute polka dot ribbon. The ribbon came from the voting of the whole guild back in February. 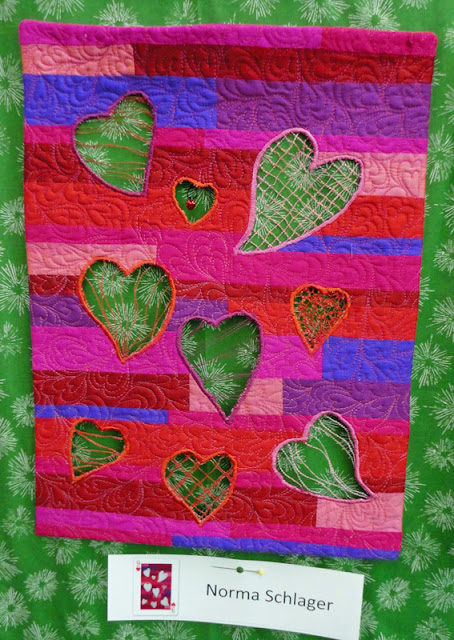 And lastly is my card from the Deck of Cards exhibit.  My quilt, The Nine of Hearts, had cut-out hearts. I thought they were going to be displayed against a white background and wasn't thrilled with the way it looked against this green backdrop. 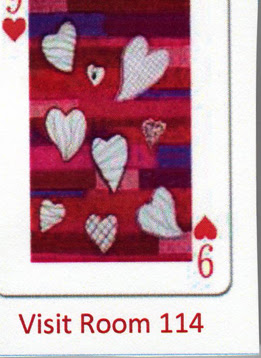 Each of the artists in this exhibit received a cute little pin to wear with their card and the room number where they were displayed. This is the way the card was meant to look.


My seventh quilt was the one that I made for the silent auction. I neglected to take a picture of that.


On Saturday we also had the opening for the SAQA show, Local Color, and I had two pieces juried into that show. It was held at the Ruth Hass Library at Western CT State University, so many of them were hung high over bookcases and things. 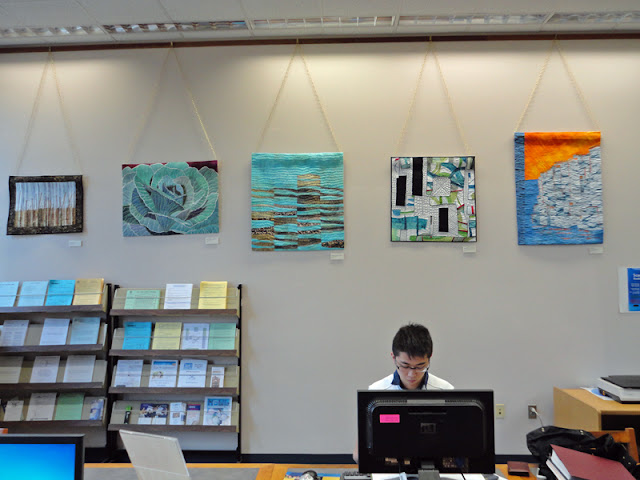 Here is my Of Cabbages and Kings, hanging third from the left.

I think that my triangular Hope Springs Eternal looks so good hanging next to Mickey Lawlor's piece using her scrumptious painted fabric.


Come back soon and I'll show some more pictures from both shows.