My son, Kurt, lives in Portland, OR, so very far away from me. But he does come home for Christmas every year for a few days and it has been our tradition to spend one day in the City. His fight home was on the 28th, early in the morning from LGA, so he opted to stay the night in the city and take the train from there to the airport in the morning.

We took the train in and walked, so much walking, to his hotel to leaves his bags. He used a wonderful app called Hotel Tonight where you can get very low rates for a room that would usually be much higher, but you have to do it the day of. The later in the day, the rates go lower.

From there we took the subway (so confusing, but I just followed him) to Greenwich Village for the restaurant he had chosen. We also do this every year. He is a real foodie and he searches around to find something special. The restaurant was Via Carota and you can read the New Yorker Magazine's review here. It was fabulous, pricey but not toooooo bad for NYC prices. It was on a list of the 100 best restaurants in NY, in a city with over 10,000 restaurants. It was small and very casual, but the food was beyond delicious.

From there we took an Uber to the High Line where he had never been. I had been a couple of years ago. If you don't know about it, it was formally an abandoned elevated railroad track on the west side of NYC that has been transformed into an incredible linear park in the sky with artwork, horticulture, and great views of the city, the harbor and the Hudson River. Lady Liberty was visible in the far distance.You can read about the High Line here. It was a beautiful day with temps in the 40's and no wind so it was perfect day for walking. It was quite crowded, but then everything is during this holiday season. 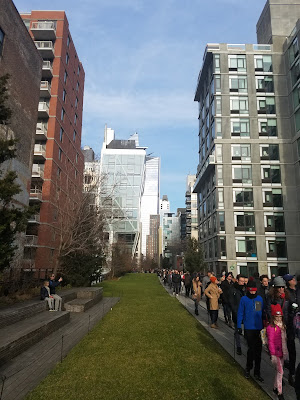 Here you can see how crowded it was. 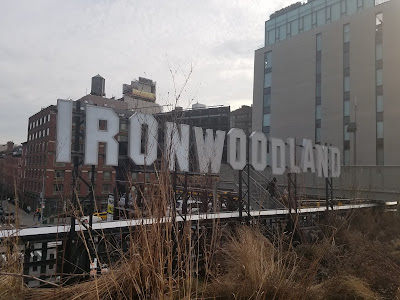 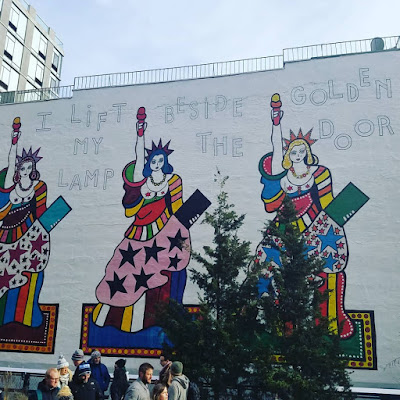 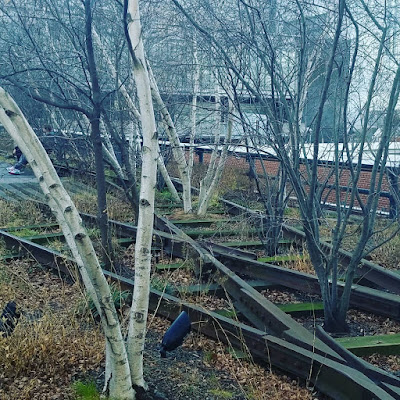 Of course at this time of the year there was little growing, but in other season it is full of flowers and grasses. In this shot you can see some of the actual track.

We started the walk about midway on the High Line and got off for a brief tour of The Chelsea Market. Quite an experience and VERY crowded. We didn't buy anything, but you could spend the day there shopping and eating, so many little eateries.

We got back on the High Line and ended our walk at the Whitney. Neither of us had ever been and they are in their relatively new building. My son very wisely got tickets ahead of time online. There was a line a block long, 5 people deep, but with our tickets on his phone we just walked right in.

The museum is really something, very modern and in spite of the crowds we had no trouble seeing it all. The special exhibit was Andy Warhol and his work dominated most of the museum, except for the top floors that had their permanent collection. 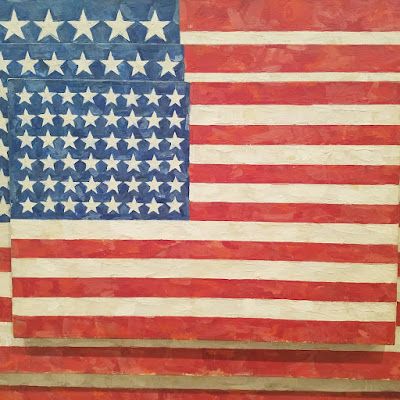 I'm sure you will recognize this Jasper Johns Flag. 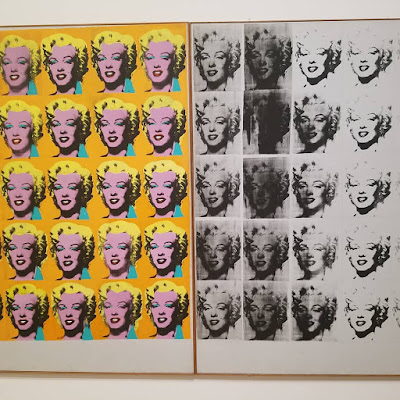 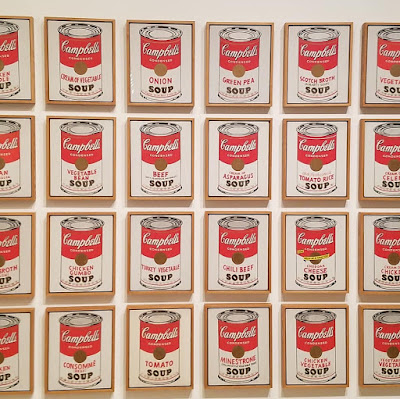 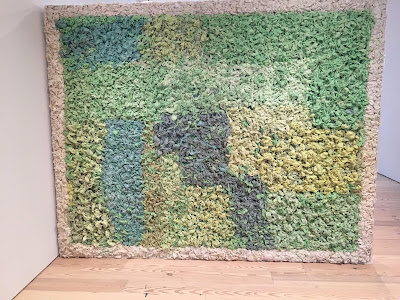 Of course this very large piece caught my eye, part of an an exhibit by Kevin Beasley on the top floor. Fiber Art!! Detail below. 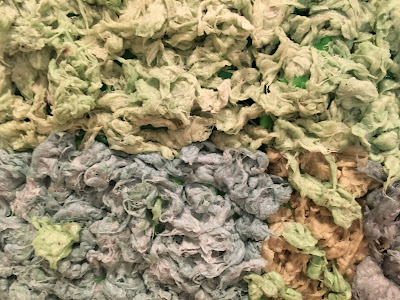 By that time, around 4, we were both beat. Our day had started at 8 when we left for the train to the city. He went back to his hotel and I went back to Grand Central Terminal for the ride back to CT, where I had left my car. I didn't realize how tired my feet were until I sat down on the train. We did pound a lot of pavement. It was another delightful day in NY and so nice to be able to spend it with my son.

Wishing you all a very Happy New Year!
Posted by Norma Schlager at 3:55 PM 3 comments:

In my last post I mentioned the decorations on the mantle. I like to change it up every few years. My favorite garden place is transformed into a magical Christmas land and I love going there. Three or so years ago I fell in love with this lime green ribbon with sparkly red polkadots and stripes and decided that that would be the theme for that year. 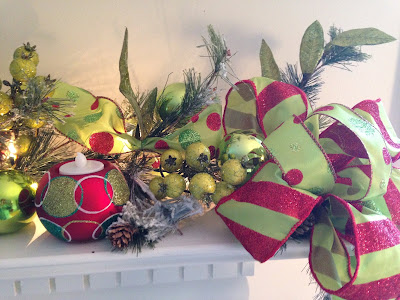 I made big bows for either end and wove the ribbon through the evergreen garland. I added lime green balls and picks of leaves and berries in lime green and these pretty votives. 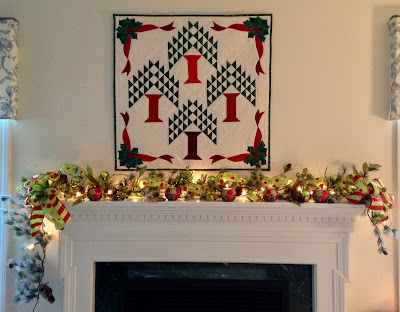 It looked best with this quilt made several years ago.

This year I wanted something different so off I went to Shakespeare's Garden (mentioned above) for inspiration. A woman was walking toward me with these fabulous long picks of red jingle bells with tiny springs of evergreens interspersed. I knew I had found my new theme. I bought three of the jingle bell picks, some new translucent red balls, some berry picks and then added some berry sprays that I already had. 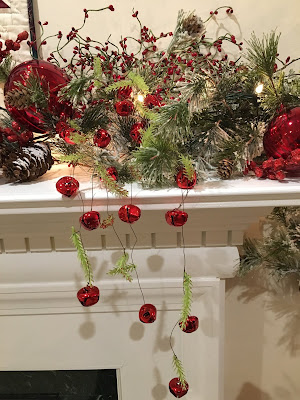 I let the bells cascade over the edge in three places. 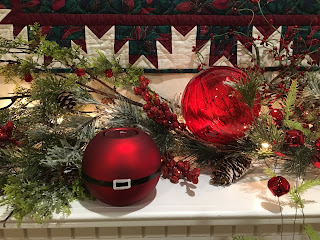 I had these cute Santa votives from last year and I thought they were a good addition. 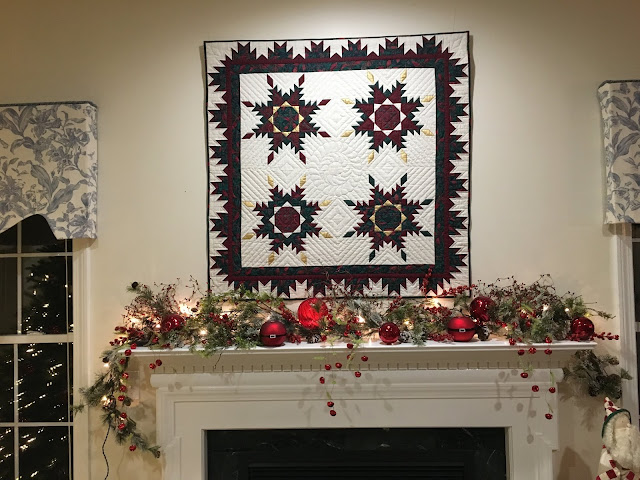 I liked this quilt with it so much better. I have three Christmas quilts and I think this is my favorite. It was a dickens to piece and then I hand quilted it with gold metallic thread. 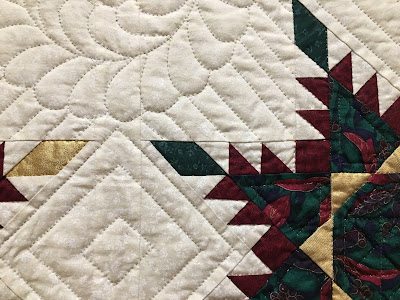 I used to be a good hand quilter with tiny even stitches, but I can't do it anymore because of elbow problems. Nor do I want to because I love to free-motion machine quilt.

Every year I manage to get a new Santa or two for my Santa tree. It's a big tree and there's always room for more. 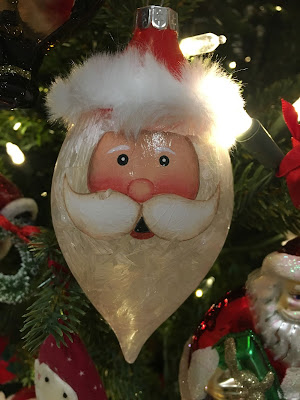 A friend gifted me with this handsome fellow, all glass with fur around his hat. 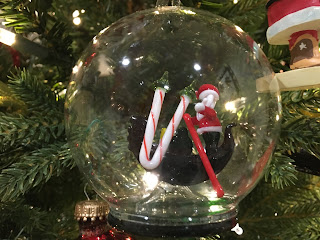 I purchased two in Murano when I was there in September. It's a little hard to see but this is Santa in a gondola, all blown glass. 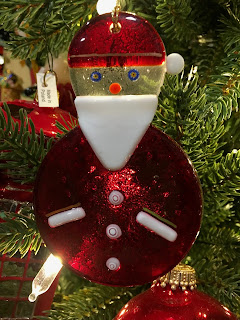 Ho, ho ho and a Merry Christmas and Happy Holidays to all!

I'm linking up with Off the Wall Friday.

Every year for the past few years I have had a Christmas luncheon for some of my female friends. It gives me chance to share my Christmas decorations, of which I do a lot, and spend a nice afternoon with friends.
I made my Santa-tinis again with the coconut rimmed glasses. I think this is the last year for them since I was vacuuming up a lot of coconut flakes the next day. I did a different treatment for my mantle this year with cascading red jingle bells, although you can't see them here. I also hung my favorite Christmas quilt that I made many years ago. It is all hand quilted with gold metallic thread. Can't do that anymore, due to elbow problems.

Am I really that much taller than most of my friends? I did have on boots with a heel, though, except for Claire, I am the tallest.

I cannot fit 15 people in my dining room, so I split them between the DR and the kitchen. I put a cutout paper tree under every other plate so that at dessert people had to switch rooms. I did that last year and it worked out very well.

In the kitchen. Notice the snowmen party favors at each plate. They were a big hit.

I saw these adorable penguins on Pinterest and knew I had to make them. You were supposed to split the second olive partly through and insert the mozzarella ball. No matter how careful I was, they broke, thus the extra toothpick through the wings. They were quite tasty to eat, too.

I think I gained 3 or 4 pounds during this, The Eating Season. I have so little willpower, if it's there I am compelled to eat it.  I have such a sweet tooth and cookies are my big downfall. Right after the holidays I am going back to NO SUGAR!

But let's enjoy this festive season while we can. Merry Christmas and Happy New Year!

For the past several years I have had a ladies Christmas luncheon for my non-quilting friends at my home. I love to do it and I also get to share my holiday decorating. This year I will have 15 guests and I decided that it would be fun to have little party favors at each place.

These are my cute (if I do say so myself) little snowman. 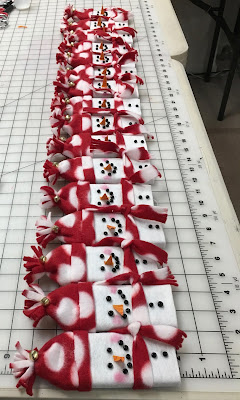 They are constructed on a Trader Joe's chocolate bar. The body is felt, big beads for the eyes, nose, and buttons, fleece for the hat and scarf. The noses were made by fusing two pieces of orange fabric together and cutting them into triangles. The only sewing was on the hats, which I sewed into tubes, then gathered at the top with embroidery floss, while adding a jingle bell and snipping the top into a pom-pom.
They were fun to make and I did  do them assembly line style. I wrapped the felt around each bar and held it together with double side tape. Then I did the hats, then the beads, then the scarves and lastly the noses. I added the rosy cheeks with a small paintbrush and real powdered blush from my cosmetics stash.

LeeAnna asked what would happen if the candy was taken out. I just tried one and the bar slid right out with no damage to the snowman. It also made it very light weight and would be cute as a tree ornament.

Feel free to copy and have a great Christmas season!

I am linking up with Off the Wall Friday.
Posted by Norma Schlager at 2:54 PM 7 comments: