We had a wonderful time in Lowell. MA over the weekend at the quilt festival. Usually it is hot and humid for the festival, but this year was delightful. Warm, sunny, and dry. Perfect for walking from venue to venue. I took a lot of pictures, but am only posting pictures where I got the artist's permission .
Please click on each picture for a bigger view. 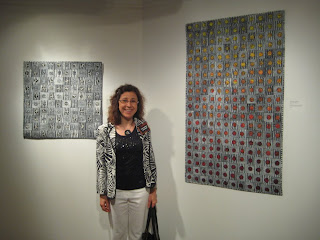 Here's Benedicte Caneill with her two quilts at the Brush Gallery. 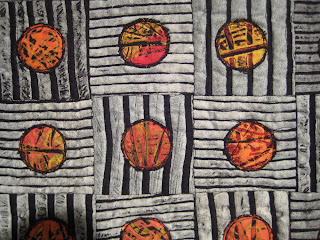 Detail of one of Benedicte's quilt. She mono-prints all her fabric, starting with black fabric. Then cuts it up, sews it back together and often adds more paint. She has been getting accepted into so many shows, including Visions and winning the Cream Award at Elements. 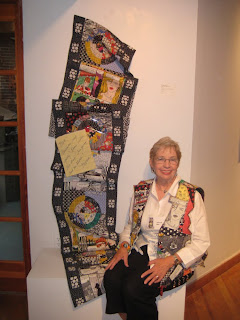 Debbie Bein with her quilt, Mona. This won Best of Show at our guild quilt show. She has also been accepted into Visions, with a different quilt. Notice the smashing vest she made to go with this quilt. 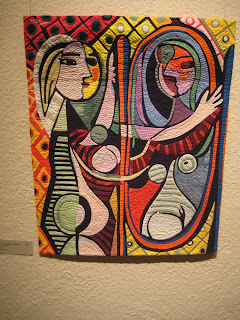 Margaret Phillip's "Girl Before Mirror. This was displayed at the Whistler where it won Juror's Choice Award. The hand quilting on this is amazing! 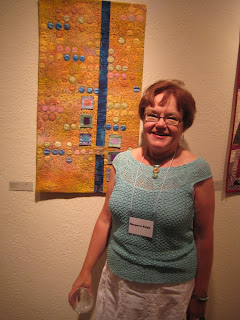 "Klimpt Abstracted" by Margaret Rolph. I love the way she is dressed to match her quilt. She even made the necklace she is wearing to coordinate with it. 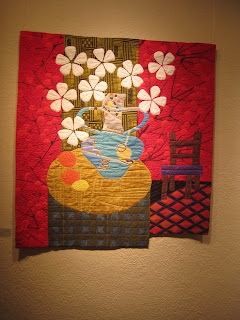 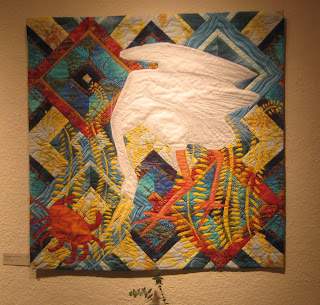 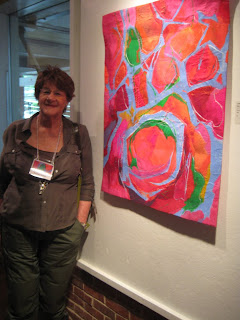 Carolyn Spiegel with her painted quilt at the Brush Gallery. Sorry, I didn't get the title. 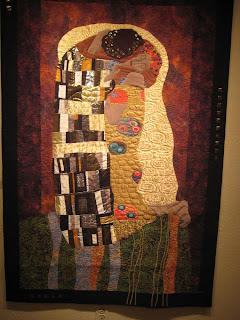 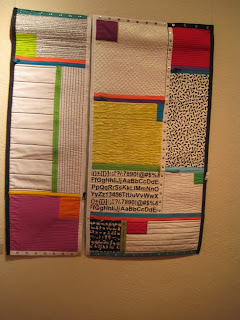 "No Matter How YOu Zip It: An Ode to Mondrian" by Mimmi Wohlberg.
Posted by Norma Schlager at 4:22 PM 1 comment:

There's nothing an artist likes to see more than that little red dot on the sign next to her piece in a gallery, since that means it is sold. My quilt, Poppies, had been juried into the show at the Whistler House Museum of Art "From Fine Art to Fiber: Interpreting the Masters" in Lowell, MA. When I walked into the room yesterday for the opening reception I could see my quilt across the room and that little red dot. I was so pleased. And even better, I met the woman who bought it. 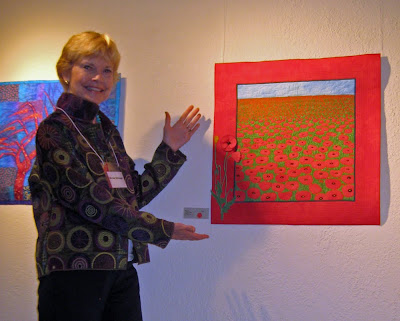 I had a wonderful weekend in Lowell with two dear friends, Debbie and Benedicte. I will post more tomorrow and the next day about the shows (They were at the Brush Gallery) and show more pictures. Right now I have to make up the CD's for another show where the entry is due this week.
Posted by Norma Schlager at 3:58 PM 16 comments: 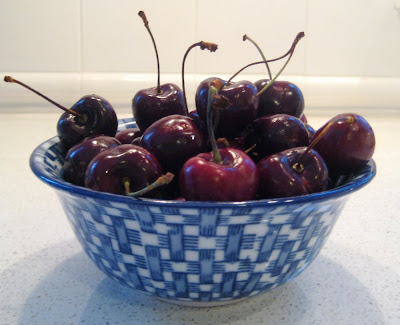 Posted by Norma Schlager at 9:02 AM No comments: 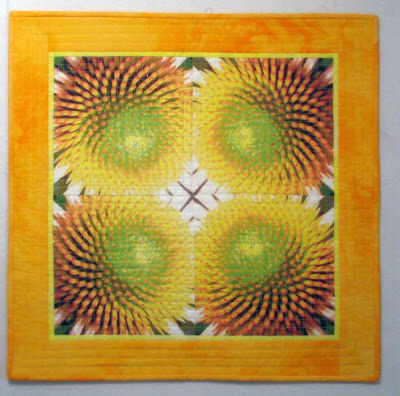 Here it is, finally finished. What should have been a quick and easy, down and dirty little quilt, turned out to be one big aggravation. First I tried doing French knots on the tips. After doing only a few, with thick embroidery floss, it was clear that I would be in a lot of pain by the time I finished. Scrap that idea.
Then I went and bought lots of beads and started sewing them on. After several hours of work and many beads later, I realized that I did not like it. Big beads obscured the design and small beads did not show. So I cut off all the beads and tried machine quilting, following the design in the flower centers. Didn't like that either. The pattern was very hard to follow and if I marked it with removable blue marker pen, it did not come out. By now the piece was so over worked that I totally scrapped it and made a new one.
I printed out four new photos and my printer was not happy doing that for some reason, but with perseverance and a few choice words, I got it done. I decided to quilt the center part in a straight grid 1/2 inch apart. It took a while, but I like it. I think the close straight lines add a nice tension to the curved lines in the photos. I'm calling it "Centered", a good play on words, I think.

Now I'm on to greater things, I hope. I'm going to make a second painted cabbage quilt, a companion piece for "Mon Petit Chou", seen here. I found a vegetable garden and took some new pictures yesterday. It is all drawn out on my fabric and I'm ready to paint tomorrow. I hope to finish this in a few days to meet a show deadline. Wish me luck!
Posted by Norma Schlager at 7:10 PM 7 comments:

Pretty as a Picture 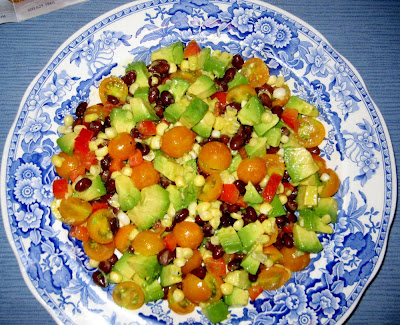 Last night I made one of my favorite summer dinners, Guacamole Salad. When I sat down to eat, I thought, "Wow, that's so pretty!" and I ran to get my camera. It's not only pretty, but delicious and very healthy. It's made with Sun Gold tomatoes from my garden, fresh corn from the farm stand, rinsed black beans from a a can, chopped sweet red pepper, lime zest and chopped avocado. The dressing is simply olive oil and fresh squeezed lime juice with a little S & P and a dash of cayenne pepper.
I find myself making more and more vegetarian meals. It's not that I don't like meat or fish, but I just love vegetables and there are so many scrumptious recipes out there. I always make sure that I add a protein, like beans or nuts or cheese or quinoa.
I only planted two of these Sun Gold tomato plants, but they are coming fast and furious. I love to eat them warm right off the plant, but I'm also using them in my cooking. Tonight I think I'll make a quick pasta topper with the Sun Golds, fresh basil, some chopped summer squash and mushrooms all sauteed in a little olive oil. Makes me hungry just thinking about it.
Posted by Norma Schlager at 9:54 AM 1 comment: 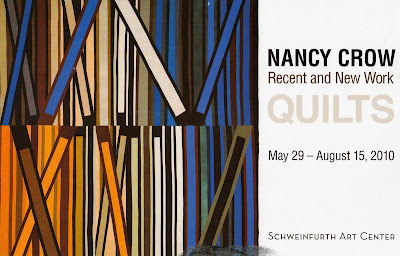 I know that I haven't posted in awhile, but last week was so busy for me. One of the events that occupied my time was a drive up to Auburn, NY with my friend, Barbara, to see the Nancy Crow exhibit. I must admit to having trepidation about the trip....such a long ride up (five hours) and back the next day, but I needn't have worried. The ride was uneventful, with little traffic and good company so the time went fast. Also, Barbara is a great navigator.
The show was well worth the trip. Nancy had 57 quilts there of new or recent work. I've always admired her work in print, but in person they are astounding! They just leap off the wall at you with the intense color and simple but striking designs. We spent about an hour there and then took a short drive to the Quilting by the Lake quilt show. This included quilts by instructors and by students who had previously taken classes.
My cousin lives about another half hour drive from there in Manlius and insisted that we go for dinner and spend the night. She has three of her children living in the area so we had a lovely mini family reunion with spouses and grandchildren.
I went to two outdoor concerts over the weekend. One at Caramoor, with extreme chamber music ( I didn't love the music, although the pianist was fabulous) and then Willie Nelson at the Ives Center in Danbury. He was just terrific and sang for over an hour and a half without stopping. He really is amazing at 77 and still sounds the same. We were lucky with the weather, which was perfect both nights.
Not much work done in my studio. The little yellow quilt that I was sewing beads on didn't work at all. After about 7-8 hours of beading, I decided that I didn't like it. It would have taken many, many more hours to complete it and lots more beads, so I thought I should quit while I was ahead. Sort of. I cut all the beads off and opted to just quilt it. I don't like the quilting either. Argh!! It's too much to pick out so I will print out four new block and start from scratch. I can't believe this one little quilt is giving me such aggravation!
Posted by Norma Schlager at 2:03 PM No comments: