Time with my son

If you read my blog you know that my son and only child lives very far away from me in Portland, OR, but he always comes home for a few days at Christmas and we try to make the best of this brief time. He arrived here early Christmas Eve morning and he cooked a fabulous meal for Christmas Eve. He is a real foodie and brought some of the recipe ingredients with him. Christmas day was just spent relaxing, opening presents with him and my sister and having a great dinner that I mostly cooked with help from him.

The day after Christmas he wanted to go to New Haven try one of their famous pizza restaurants. Most of them are very old and claim to be the ones who brought pizza to the northeast. We went to Sally's in Little Italy, right down the street from Pepi's, which now has a branch here in Danbury. The restaurant opened at 11:30 and we got there at 11 and there was already a line. It was chilly day and we were glad to get let in at 11:30. It was a very low key, no frills restaurant with just a few choices of pizza, no salads, no grinders, no wine, just pizza, beer and sodas. It was good, but I'm not in a hurry to drive an hour to get there again.

To me the best part of the day was the Yale University Art Gallery.  I can't believe I had never been there before. It was like being at a smaller version of the Metropolitan Museum of Art in NYC. It had an incredible collection of just about any artist you could name, African art, antiquities and many more. AND it was not crowded as I know the Met would be AND it is free and open to the public.
There were special exhibits on the fourth floor. One was Ceremonial Dress from Southwest China and one was about 200 years of Indigenous North American Art. 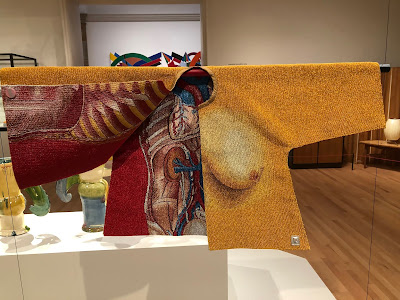 Most of the pieces in the China exhibit were very old. but this modern piece really grabbed my attention. It was woven from metallic thread by Jon Eric Riis using Chinese weaving techniques to get a very painterly effect. 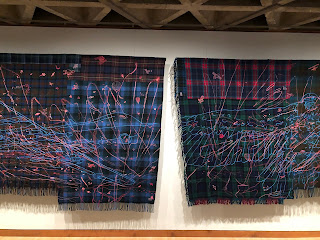 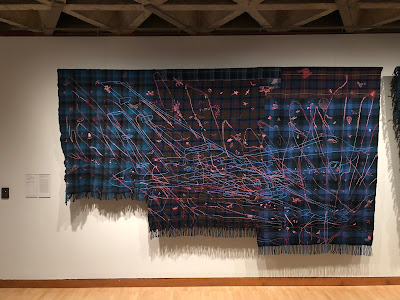 This very large piece was in the native American exhibit. It was woven and embroidered to tell a story. Be sure to click on this one to see a larger view.

The next day we took our annual trip into NYC. We took the train in and left my car at the train station. We walked around and took in the sights of NYC at Christmas, always exciting.

Saks' Fifth Avenue during the Day, so pretty!

The same Sak's Fifth Avenue at night What a difference!

The famous tree at Rockefeller Center with the beautiful angels that line the walkway to the tree.

I don't remember  seeing these see-thru igloo-like structures other years at the tree. It was cozy place with small tables and chairs inside for people to get out of the weather and maybe have a hot drink.

We always have lunch at a special restaurant that my foodie son had researched. This was on    Columbus Circle and their signature dish is octopus, as shown on their logo. They had a price fixed luncheon, a little pricey but oh, so delicious.

My first course...lobster, pickled eggplant, basil leaves and seeds in a Burrata cheese sauce. Heavenly...I wanted to lick the bowl.

My son's second course, a kind of fancy ravioli with mushrooms and other delicacies in a brown butter sauce...delish!

My second course, Fusilli with braised octopus and bone marrow. The octopus was so tender and there was plenty of if nestled in the pasta. We also had wine, a shared panna cotta and cappuccino.  A truly wonderful meal. 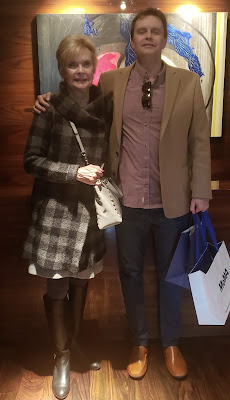 Not a very good picture of my handsome son, but it was the only one we had taken. I still can't get used to him towering over tall me even though it's been that way for years.

Now he's back in Portland but I will see him again this winter because he plans to visit me in my Florida home. So Happy New Year to you and yours. I hope you get to spend it with family and friends.

Every year I have a Christmas luncheon for my non-fiber friends. These are the gals who go out to dinner every Friday night (not alway this many, but whoever is available) and my travel buddies. This year we had an ice storm the day before, but thankfully the weather cleared and we had a nice, although very cold, day. 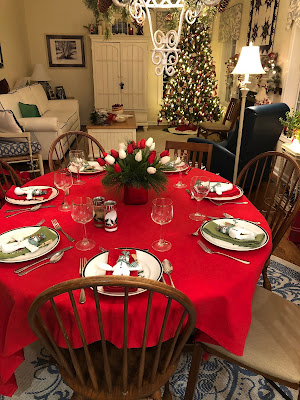 Since I can't fit everyone in my dining room, I did as I did last year and split them between my kitchen and dining room. There were little green paper trees under some plates and those people got to switch rooms for dessert. I used red and white tulips for my kitchen arrangement, something I had never done for Christmas, but I thought it was very pretty. This is looking into the family room with my big Santa tree.

Remember that you can click on any picture for a bigger view and then click again for an even bigger view. 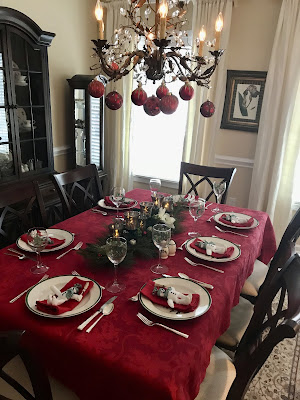 The dining room. Notice the little snowman favors that I had blogged about before. 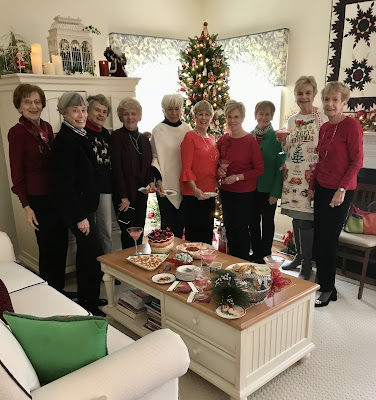 I didn't take any pictures of my guests, but thankfully some of them did. I still have on my Christmas apron that was a gift from Maxine last year. This is almost everyone. 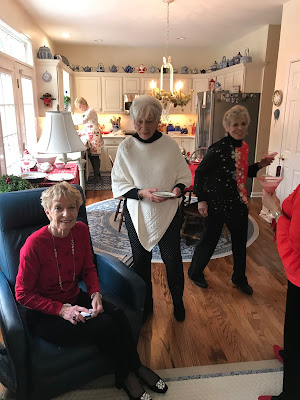 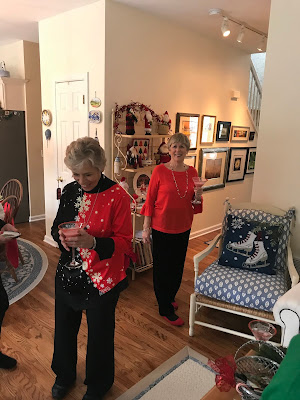 Terry is holding her Christmas martini. I do something different every year. This year it was Bailey's Red Velvet Irish Cream Liqueur, Peppermint Schnapps and Vanilla Vodka. rimmed with red sugar crystals....very delicious and very potent. You only needed one, then we switched to wine. 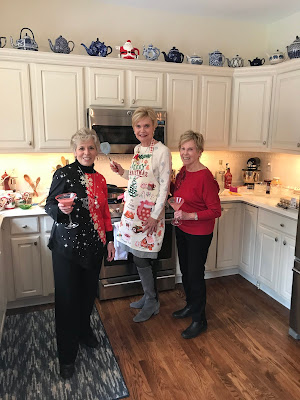 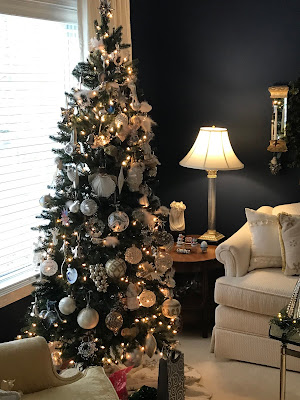 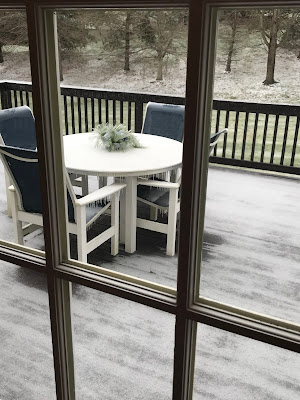 The ice storm from the day before coated everything including the arrangement on the deck table. 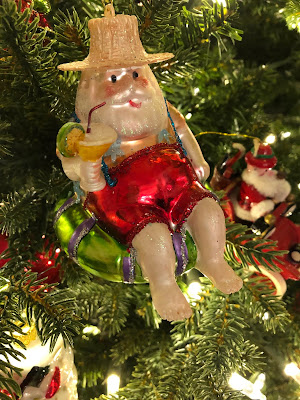 I usually buy a new glass Santa every year, but I have so many that he has to be unusual for me to buy him. This straw hatted Santa in his inner tube with a Margarita reminded me of Florida so he made the cut. 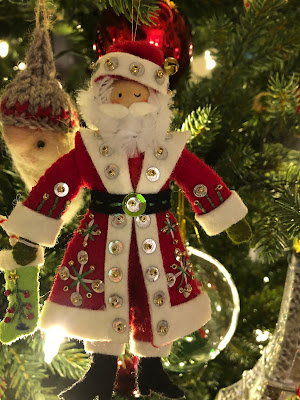 This is the Santa that I made this year....so much work...but he is happy on my tree.

And I wish you a very Happy Christmas and a New Year of good times and good health.

Since I have been doing more hand work I thought it would be nice to have a little needle book instead of the scrap of flannel or felt that I had been using. I went online to get some ideas and found a pattern by the same woman who designed my felt Santa. Not as fiddly as the Santa to make, but still a fair amount of appliqué and embroidery

I made five, one for me and the rest for gifts. 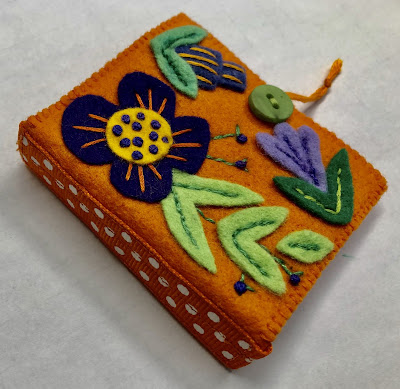 The pattern calls for grosgrain ribbon for the book spine and I happened to have this cute polka dot ribbon in several colors left from another project. I used it on three of them. The others got a solid color. 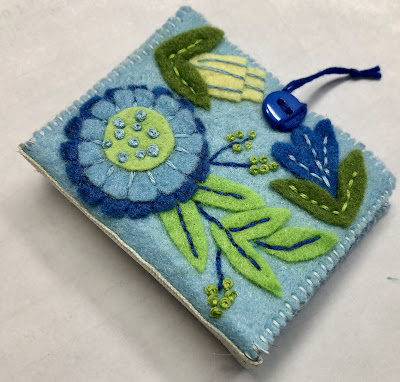 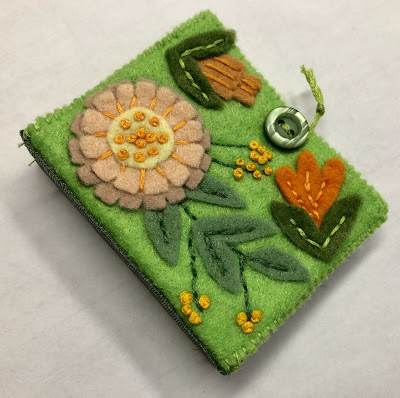 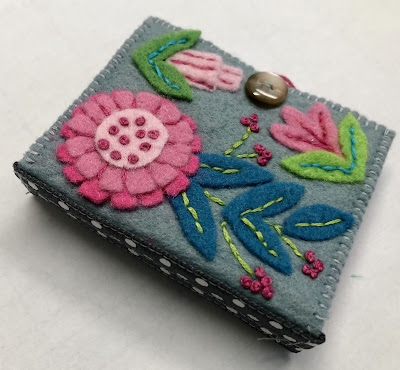 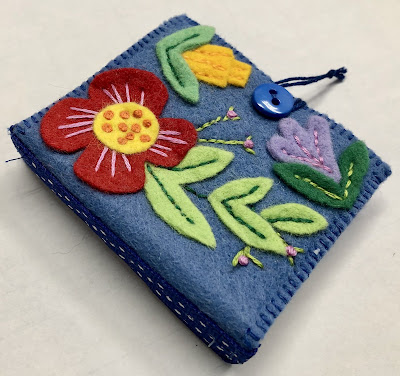 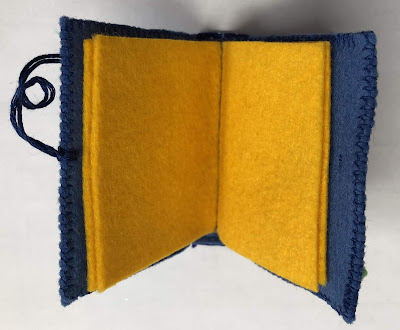 It has four pages inside. I'm linking up with Off the Wall Friday.
Posted by Norma Schlager at 9:10 AM 6 comments:

I give a holiday luncheon every year for my non-fiber friends. Last year I made party favors, which you can read about here.http://notesfromnorma.blogspot.com/2018/12/snowman-assemblyline.html They were so well received I decided to make something again this year. A different snowman. 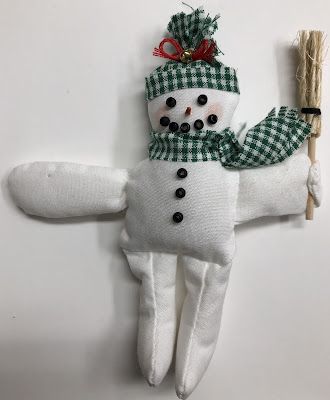 I started with 5 1/2" blank white doll bodies that I found online. 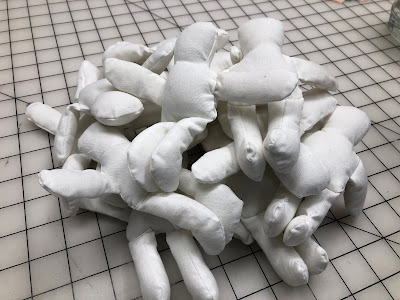 How about this conga line with fourteen snowmen? There was no sewing involved, but a lot of gluing. For the hats I glued a piece of homestead fabric with an ironed cuff around the head, overlapping in the back. Then I gathered it up with red embroidery floss tied in a bow and fringed the top to make a pom-pom. A small jingle bell was glued on. Glued on beads for the face and buttons. Small broomsticks found in the doll house section of Michaels. Scarves of more Homestead fabric (it is woven so it has no wrong side) fringed, tied and glued in place. Toothpicks for the nose, colored with an orange marker and cut to size. The little guys have a gold thread loop on the back for hanging.

Snowmen seem so appropriate for today. We had a big snow storm, unusual for this time of the year. We usually don't get snow until after Christmas, but there are always exceptions. We got about 6 inches, but some parts of CT got 16 inches. Alright, that's enough snow for now. I hope the rest doesn't come until I am safely in Florida.

I will be linking up with Off the Wall Friday.
Posted by Norma Schlager at 5:30 PM 2 comments: