If you follow my blog you may be anticipating my pictures from Easter Day at my niece, Lauren's. She outdid her self once again with a whole new theme this year, white bunnies.

Every year when I go to the stores I am so taken with the Easter decorations. I really have to be strict and remind myself that I don't entertain on Easter anymore. I am tempted by all the bunnies, pastel dishes and other goodies that abound in Home Goods, Pottery Barn and elsewhere. So I have to be content to get my Easter fix at Lauren's. She is a wonderful cook and hostess, as I've said before, and it was a delightful day.
Happy Easter!
Posted by Norma Schlager at 11:27 AM 4 comments: 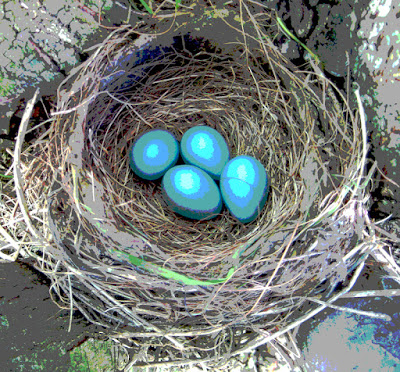 Posted by Norma Schlager at 6:00 AM No comments:

I made this quilt a while ago when I was in my rust dyeing stage. I loved the results, but had a hard time quilting through the sections of the quilt that were rusted. The thread kept breaking, no matter what I did. I know that others have made pieces with rusted fabric, so I don't know the secret to it. Do you? 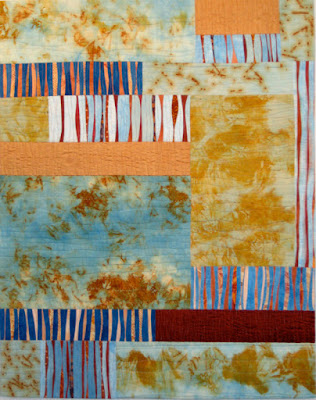 To rust the fabric, I use items that would  rust, (duh!) like nails and steel wool, wrapped them in vinegar soaked fabric (this time a light blue hand-dyed), covered them to keep them wet and let them sit overnight. The results were often very interesting. One section, on the right hand side of the quilt looked to me like fish, fossil fish to be exact. Can you see the fish? 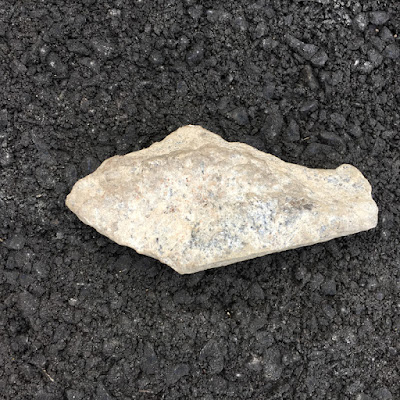 While out walking the other day I saw this rock just laying there on the pavement and I laughed out loud and said "fossil fish!" I put it in my pocket and took it home. I wish I could attach it somehow to the quilt, but it's much too heavy. Does it look like a fish to you?
Posted by Norma Schlager at 6:30 AM 1 comment:

Our next resting place was The Victoria Falls Safari Lodge in Zimbabwe. This was a very pretty place, altho still rustic. It was built on many levels and while dining in the main dining room, which was open to the elements and at the highest level, you could see a watering hole not too far in the distance where you might be entertained during dining with animals quenching their thirst. 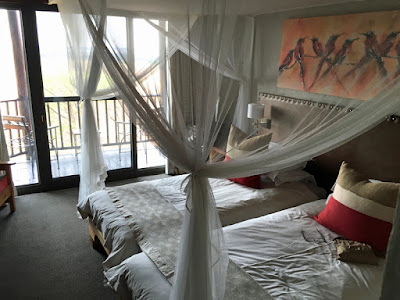 I only have this one picture of our room which was much bigger that it looks here. We had a nice balcony with great views.

Our last place was the Chobe Marina Lodge in Kasne, Botswana. Our rooms were at ground level and we actually had a suite, with a living room between the two bedrooms. 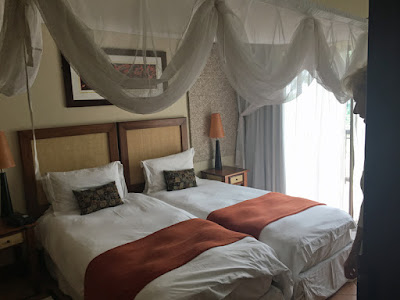 There's that ubiquitous mosquito netting again. This place had such a fancy way of trussing it up. The bedroom was rather small. 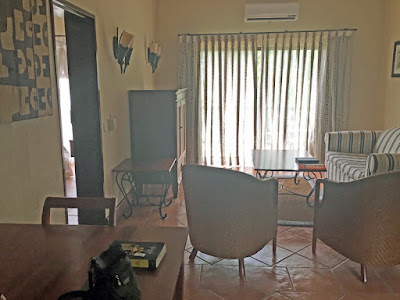 The quite large sitting room made up for the small bedroom. This is only half of the room, the other side had a bar, fridge, table and chairs. 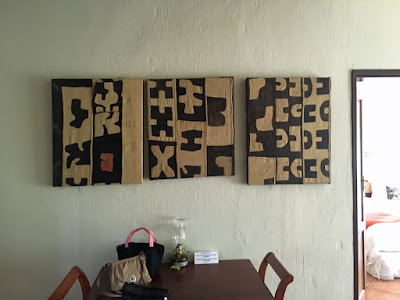 Look at the fiber art over the table. Again, did they know I was coming? 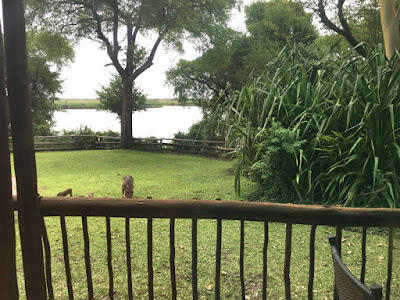 The great view from our patio, complete with warthogs.

So that's about it. I know that when other people went to Africa I was always curious about their accommodations. Some people sleep in luxurious tents, with outdoor showers and privies that need an nighttime escort. Others sleep under the stars. Ours was an interesting mix, although we were always inside. Our rooms were always air conditioned, which was a good thing because we were there during a heat wave where it was well over 100 degrees during the day, but the common areas and dining rooms were always open to the elements with no AC. It worked out just fine.

Posted by Norma Schlager at 7:00 AM 2 comments:

When I was sharing my pictures of my trip to Africa this past fall, I promised to show you pictures of where we stayed. Then other things intervened. So just a few months late, here are a few pictures of some of the places we stayed. 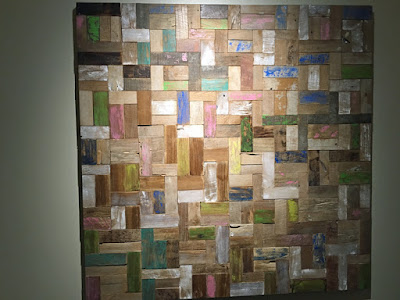 Our hotel in Cape Town was the beautiful Southern Sun Waterfront, conveniently located right in the middle of town and an easy walk to a lot of attractions.  The hallways had several versions of this artwork made of reclaimed wood, so reminiscent of a quilt. They must have known I was coming.

Our next hotel was the Arabella Hotel and Lodge, a most luxurious golf and spa center, in Hermanus, South Africa.  I had the best massage of my life there one free afternoon. We stayed there two nights and used it as a base for our planned excursions. The rooms, the food and the service were great and we were sorry to leave it.

The next five photos are from the Hanglip Mountain Lodge in the Entabeni Safari Conservancy. This was where we had our first safari rides. It was rustic, but charming.

The mosquito netting was always tied up like  this during the day and when we came back after dinner it would be dropped down, although we never saw any mosquitoes. 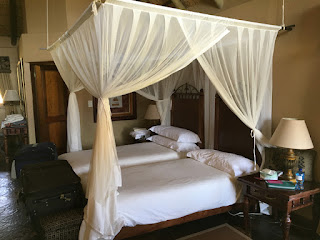 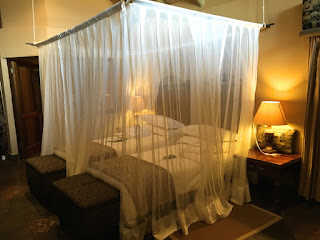 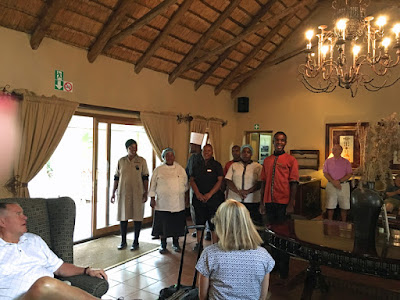 One evening the kitchen staff surprised us by coming out and singing for us after dinner. They had fabulous voices and were very entertaining.


Now this is getting longer than I like my blog posts to be, so that's it for today. Come back and I'll show you some more.