With the Woman's Club annual Arts and Crafts completion coming up I decided to use my snowed in days during the Blizzard of 2015 to good advantage.  First I should tell you that we here in western CT really dodged the bullet.  They were predicting up to 36" of the white stuff and some parts of the state and other areas of New England did get that much, but we only got about 7 inches.  I am not complaining and I was so glad that we did not lose power so that I could sew.
I can no longer enter quilts into the competition since I am considered a professional because of my few sales here and there, so,I decided to make silk shibori scarves.  I had purchased a pretty one last year at the Brookfield Craft Center and I had done a fair amount of shibori dyeing with good success,  but I had never done it with silk.

This is the scarf I purchased last year. I liked its neutral color and have worn it quite a bit because it seems to go with a lot .  It was my inspiration. I had a hard time deciding what color to use for the initial pole wrap shibori and eventually chose olive green, a color I had used before in cotton dyeing and had liked and I thought it would be neutral. I did not want to try and copy this scarf. I wish I had taken a picture before I over-dyed it, but it was quite ugly.  The color separated into a yucky orange and green.  To make maters worse, I dyed three scarves in the same color.  What was I thinking?

What color should I use for the Itajime part where sections of the scarf are clamped and then dipped into another color?  I chose chocolate brown with a little black added.  I wanted a rich, dark color as in the one I had purchased. Instead I got this wishy-washy brown and the color migrated into the squares.  When I had done Itajime on cotton the blocked areas stayed the original color. I used different circles on the other two and they are equally ugly.  Maybe if I backed them with a fusible I could use them in an art quilt if I did a lot of stamping on top.  Maybe.... Or maybe I could dye them black and use discharge paste or bleach to do a pole wrap shibori again.  Maybe.....

Sooooooo, I made two more, this time using colors I like and was rather pleased with the results.  I gave a lot of thought as to the color I should use for the over-dyeing and decided on a navy blue for the chartreuse.  I had used navy before on cotton and it is a rich dark navy. 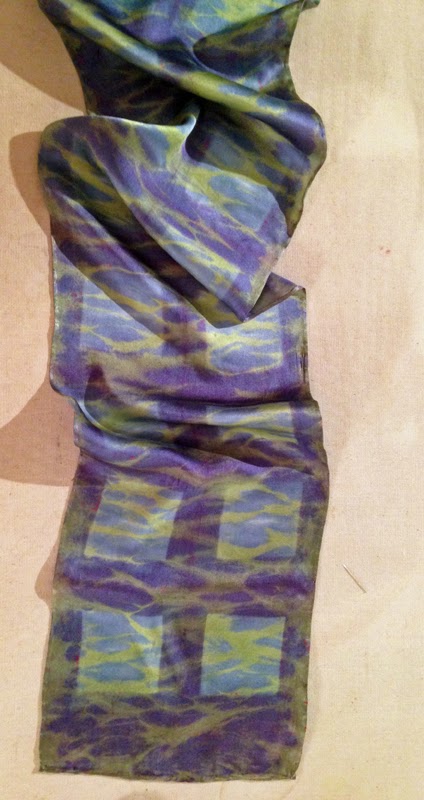 And this is what happened.  The navy is very purpley and migrated into the squares.  Not too horrible, but not at all what I had in mind.  After this I decided to keep the turquoise shibori just the way it is and call this a lesson learned that silk dyeing is not the same as cotton and get on to another kind of scarf, this time totally different.

I think this one is a winner.  I sewed strips cut from silk men's ties onto a lightweight cotton foundation and then backed it with fleece.  It is quite attractive on, with the pretty silks facing out and the warm fleece against the neck.  It should look good with my white down jacket. 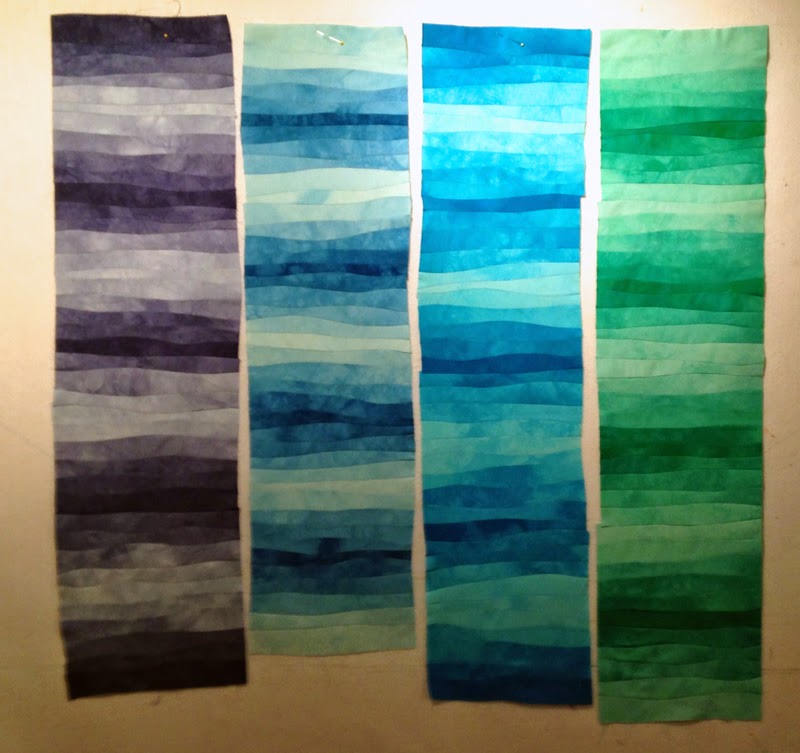 I have been sewing and working toward my next big quilt. These panels are about 10" wide and 44" long made with all my hand-dyed fabrics.  I have two more greens to do and then I will decide what to do with them.  I have some ideas and that keeps changing. They may get cut in half vertically. I'm making these using my skinny-wiggly piecing technique, but that uses one inch strips and these start out with two inch strips and go together so much faster.  Maybe they are fat-wiggly piecing.

In person there is more of a change in color  between panel 2 and 3.  Hmmm, who's lying, the camera or my eyes. Stay tuned and I'll show my progress as I move along.

I'm linking up with Off the Wall Friday.  See what others are up do in the fiber art world.

Yesterday I attended a regional meeting of SAQA.  At the last couple of meetings we have had a raffle of items that members have contributed from their stash. I bought three tickets for a whopping three dollars and I was one of the lucky winners.  Each winner got to choose from what had been assembled into groups.  The pink and red of the buttons appealed to me and I took the rest of the bundle without really examining it until I got home and was so pleasantly surprised by what was in it. 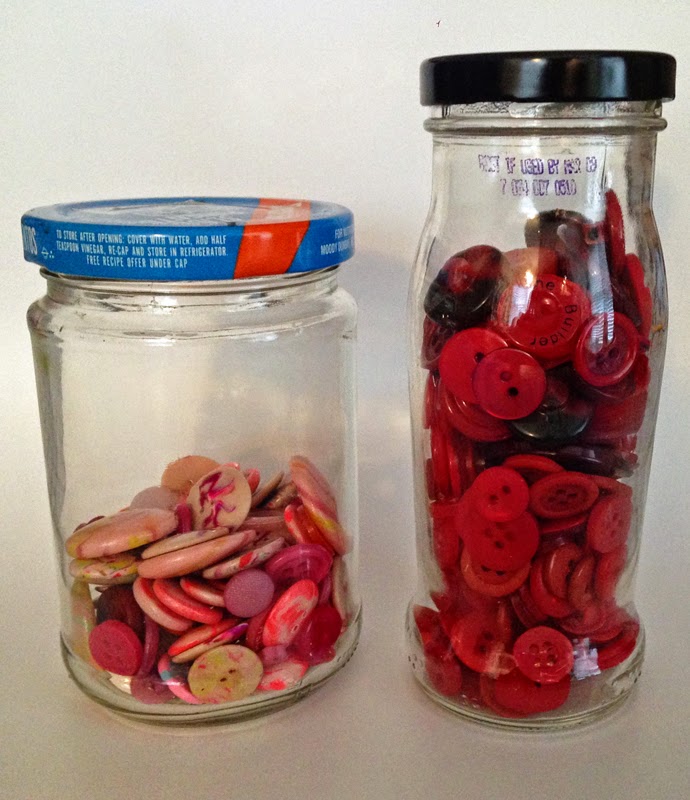 First those pink and red buttons.  Not sure what I will do with them, but they just made me smile. 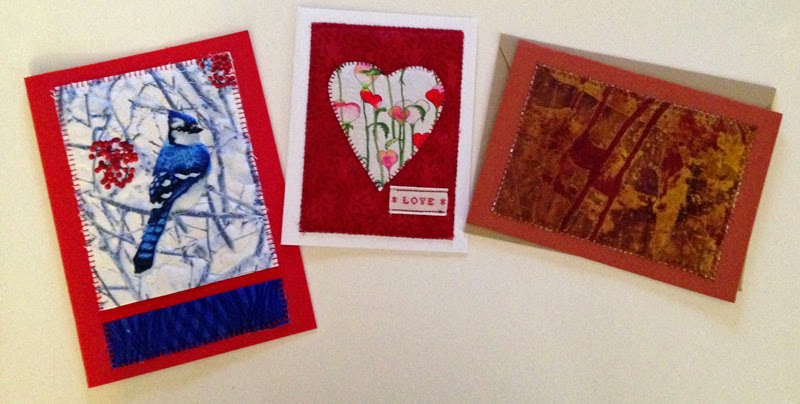 These three beautiful hand made cards were made by Barbara Adams.  Each one was quilted and sewn onto the card with a button hole stitch and came with a matching envelope.  The one on the far right is made of hand dyed fabric from Ghana.  They will be very hard to part with. 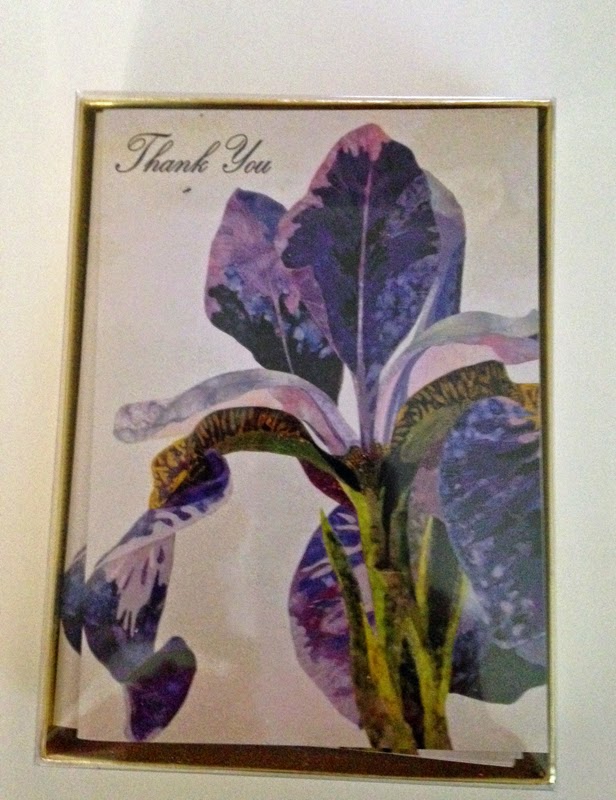 These lovely Thank You cards, a whole box of them, are made from an original work of art, Blood Iris, by Kate Themel. 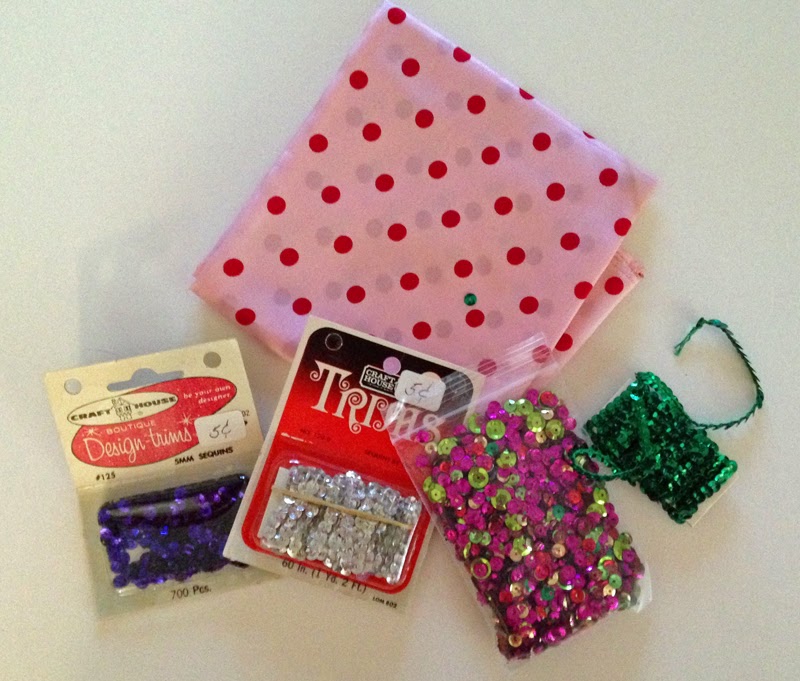 And lastly this fun collection of sequins and a cute pink polka dot scarf.
Posted by Norma Schlager at 9:43 AM 2 comments:

I have started on a new project but I'm not sure if it's doing what I want.  I had this all in my mind and have been looking at this fabric for quite awhile and finally started sewing.  My vision was to use all of these six-way gradations and sew them in units of dark to light to dark. There will be several rows of different blue and blue-greens separated by very narrow strips of black and white striped fabric.  This is the first blue in the run. 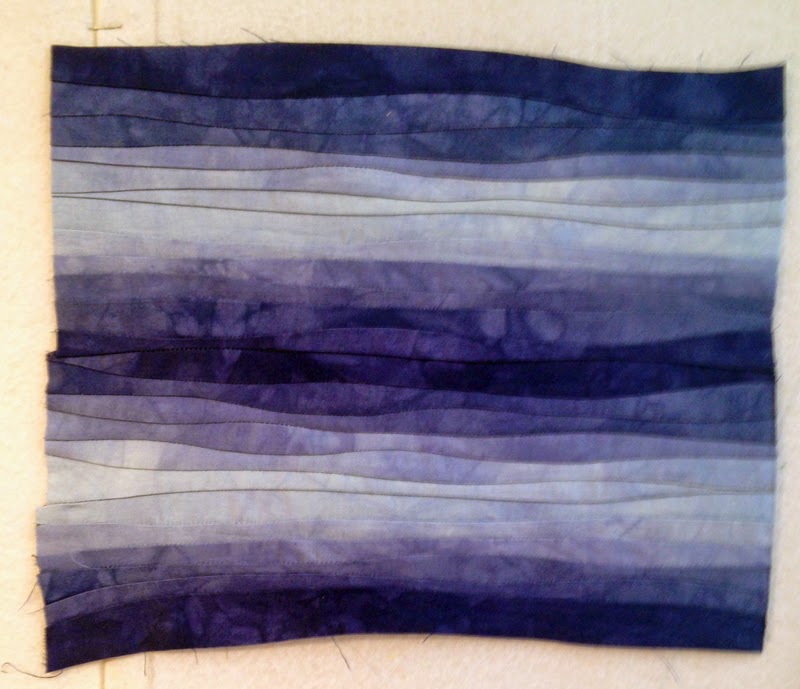 On my first attempt I cut the strips in the usual one inch width and them sewed them together in the usual skinny wiggly piecing method.  I thought they were too skinny and I would have to make sooo many to get the desired height of about 40 inches. This one unit only measures about 9 inches high by 11 inches wide.  Do the math.

So I decided to cut the strips 2 inches wide and sew them together.  This is two units and measures about 40 inches by 11 inches wide. I know it's probably hard to visualize what I want to do so stay tuned and check back later.  I'm trying to give the impression of undulating.  Am I undulating? 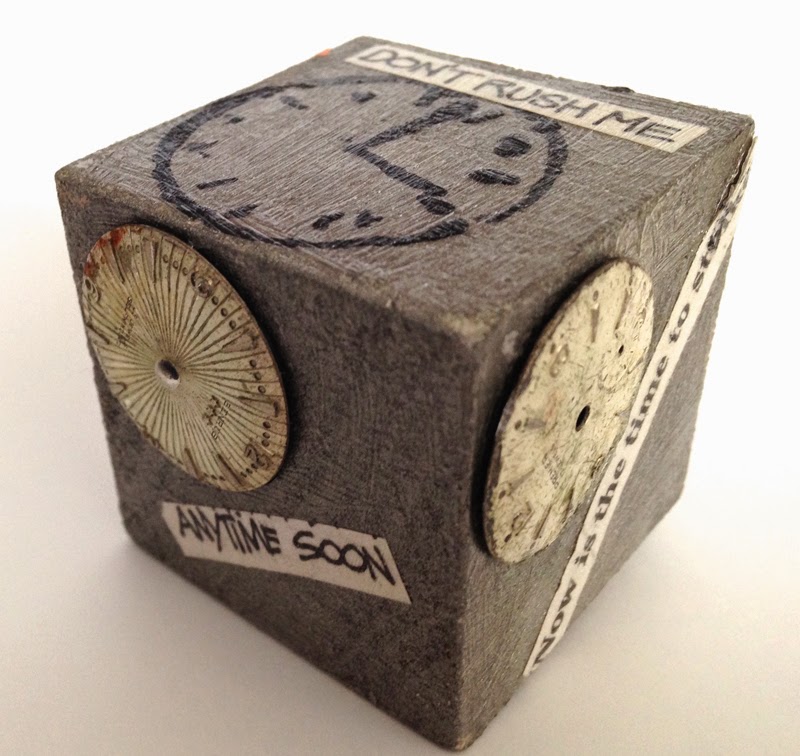 My FANE group that meets monthly was given another fun challenge by our mentor, Jane Davila.  We were given plain wooden blocks that are 1 5/8" on each side.  I took one block home and totally ignored it.  At our last meeting members brought in their treasures, and treasures they were.  It was hard to imagine all the things that were done with the blocks and I felt so lame for not having done one.  I tried to think of something that no one else had done and then I remembered these antique watch faces that I purchased for a small art quilt a couple of years ago and a cute stencil I had in my stash and decided to go with a "time" theme.  I went through a couple of day's newspapers and found a few quotes to cut out. 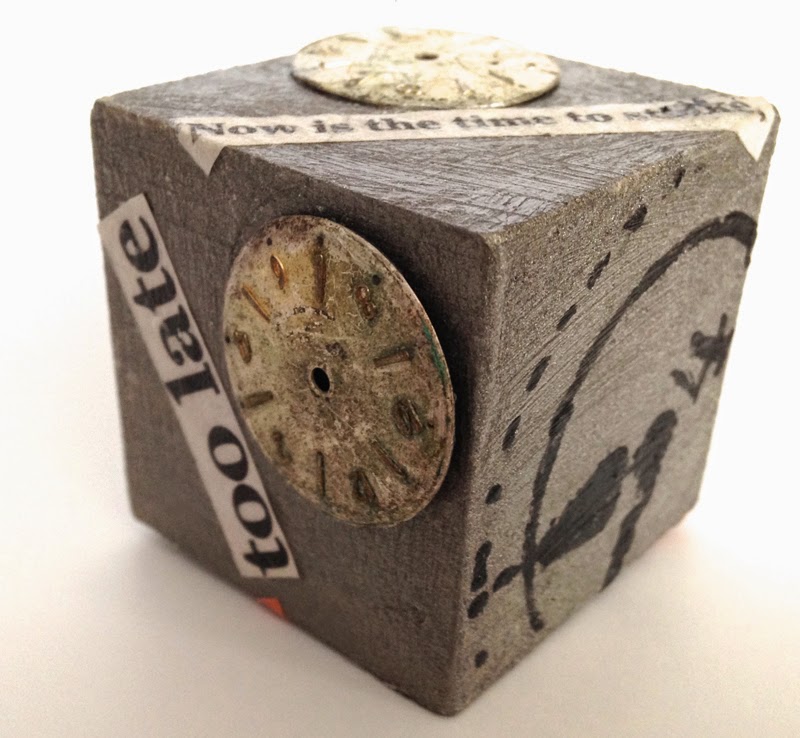 I painted the block with silver paint.  It doesn't look this rough in person, but perhaps I should have sanded it to make it smoother. It look very grungy here. Not so grungy in real life. 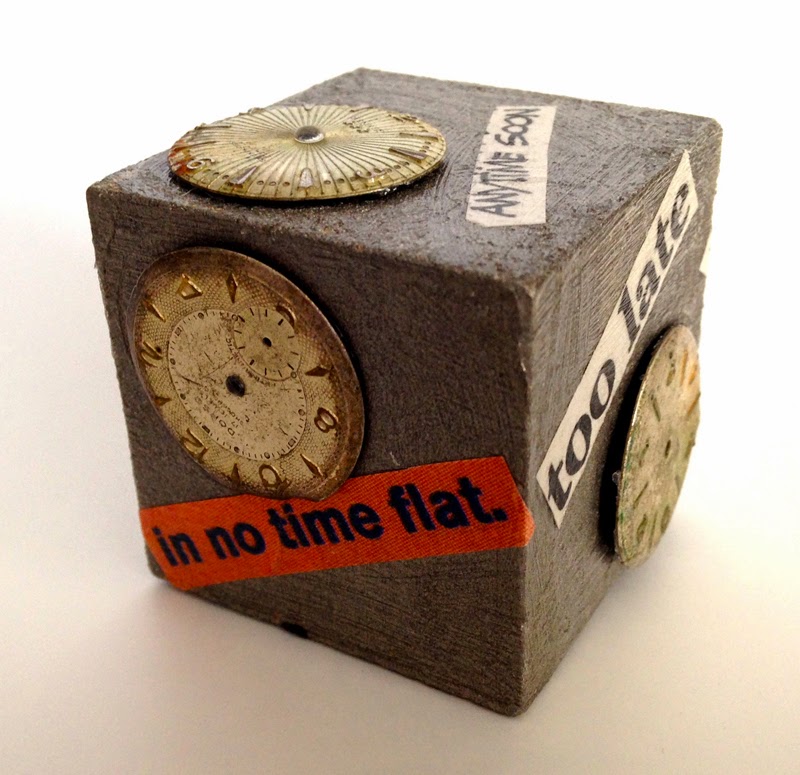 You can see Cindy's block here and Jane's here and even more here.

I am linked to Off the Wall Friday.
Posted by Norma Schlager at 11:01 AM 9 comments:

The art quilt group of the big guild, Northern Star Quilter's Guild, of which I am a member has a challenge each year and the results are hung at our annual show the first weekend in May. This year the theme is "Under the Microscope".  We are to create a microscopic image of something that has an interest to us. This is not meant to be a close-up or Macro shot , but a true peek thru a microscope.  The internet abounds in them.  I borrowed a book from a friend and in perusing it, I thought that this image would be interesting.  It is of pollen and since I like plants and like to garden I thought it might be interesting to try and interpret it in fabric. 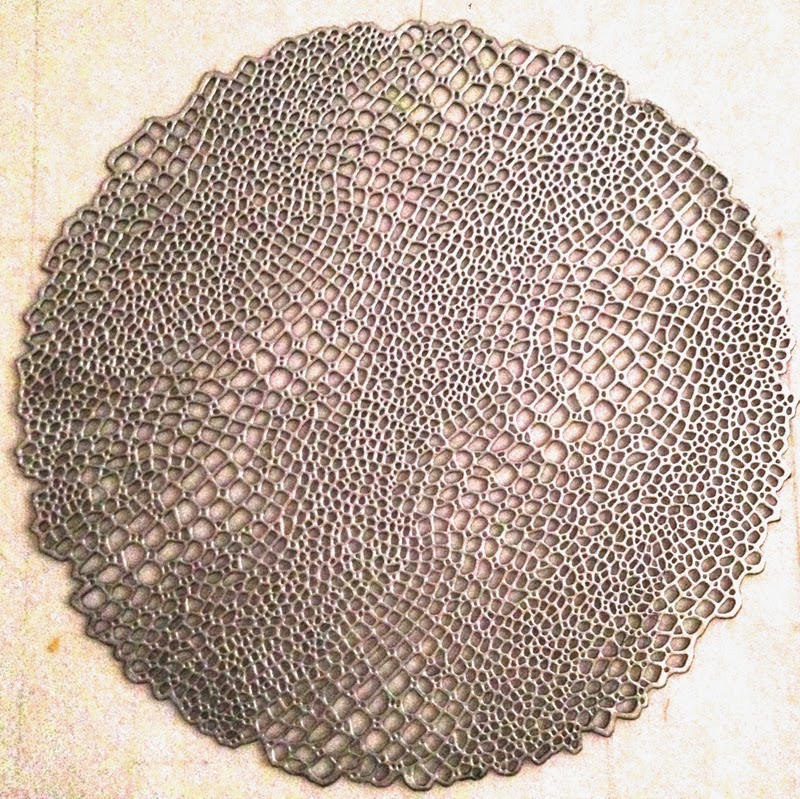 Here is where the serendipity comes in.  This very same friend a couple of weeks later presented me with this plastic place mat that she had found at Home Goods, thinking that it would be fun to use it for dyeing with some texture.  She had no idea that I was thinking of using that photo. Can you see why I was so excited to receive it?  The patterning is almost exactly the same as the photo. 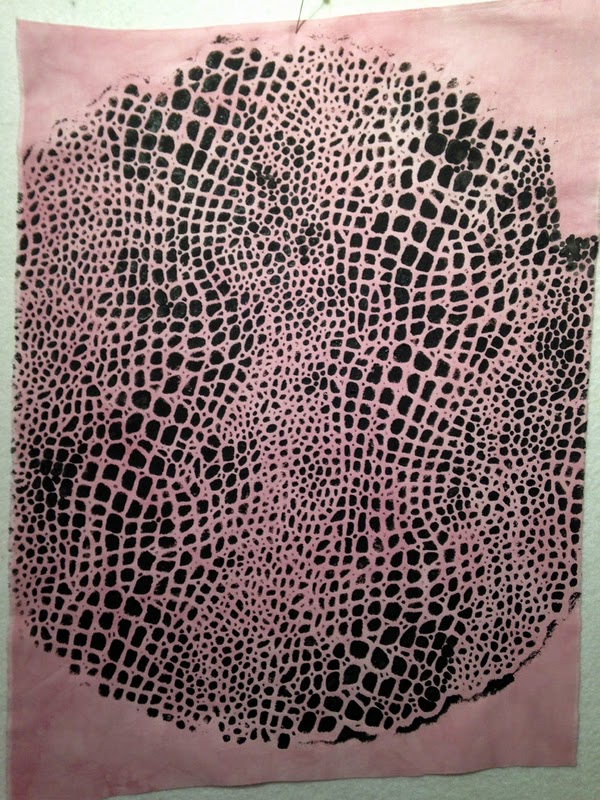 I went thru my hand-dyed stash and found this winey pink and using the placemats as a stencil I used black acrylic paint to make this fabric. 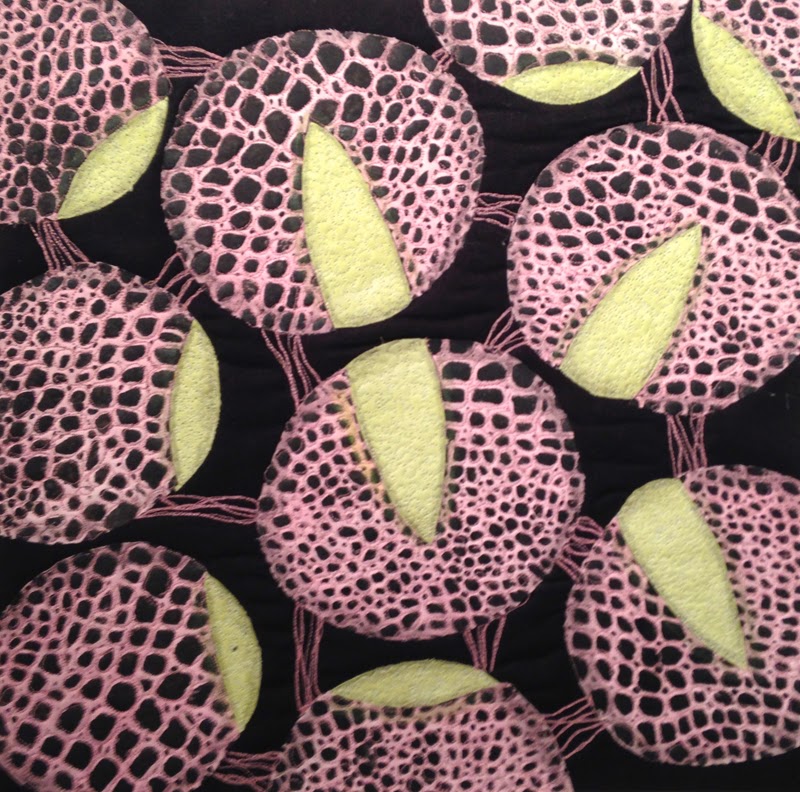 Then using the photo loosely as guide, I fused down the shapes onto a black background. Does it remind you of Packmen? 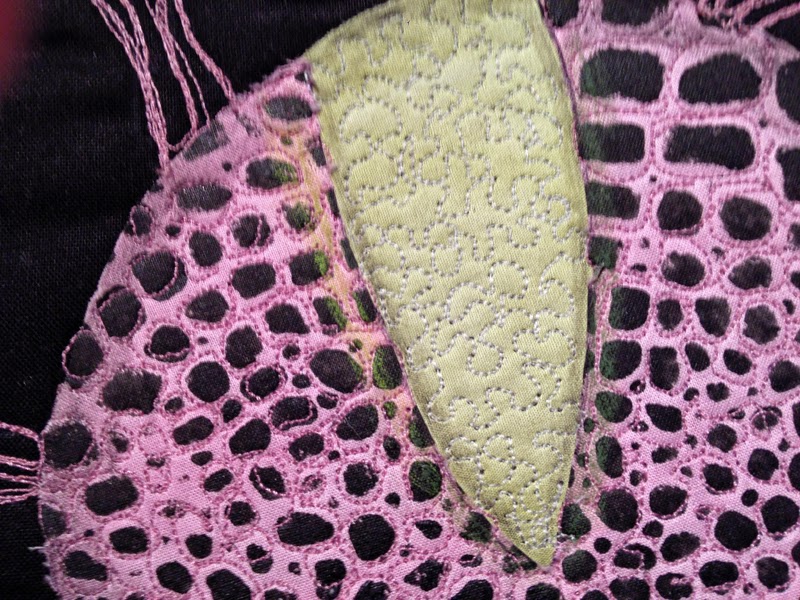 I free motion quilted around all the shapes and used some colored pencils to give it some dimension.
I think I will name it Achoo! even though I don't have allergies.


I'm linking up again with Off The Wall Friday.