As I said yesterday the Hawaiian Village Hilton was quite a spread.  There were gardens, ponds, animals, and even a beautiful wedding chapel. 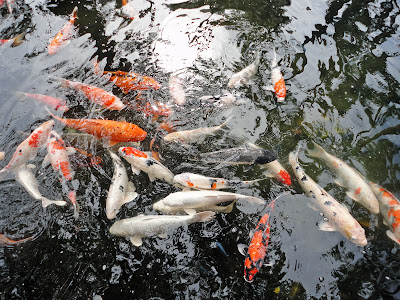 Koi were very popular in Hawaii and we saw them in several places, including a large pond at the hotel.  I saw stunning ceramic ones in gift shops, quite large (actually life size) and quite expensive. 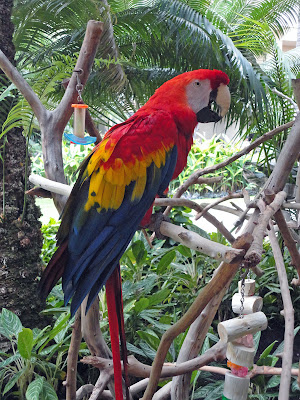 There were several beautiful parrots, not caged or tethered, but they seemed perfectly content where they were and very willing to pose for a picture. 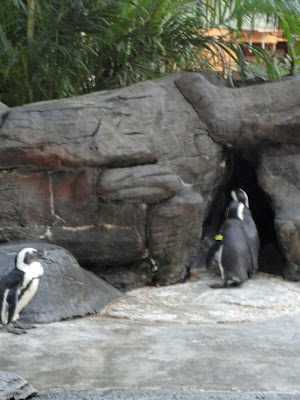 I never expected to see penguins, but there they were.  There was no sign telling the species, but obviously they liked the warm weather. 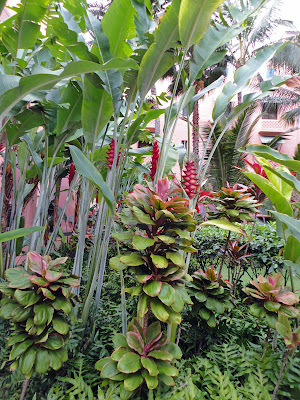 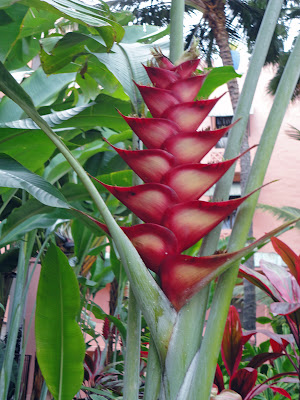 On a more serious note, we had to visit the Pearl Harbor Memorial and the Arizona. 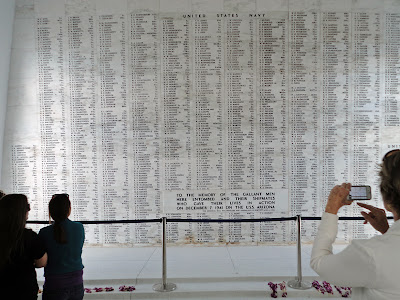 This was the plaque with the names of all the men who were killed on the ship that terrible day and whose bodies are still within the ship. 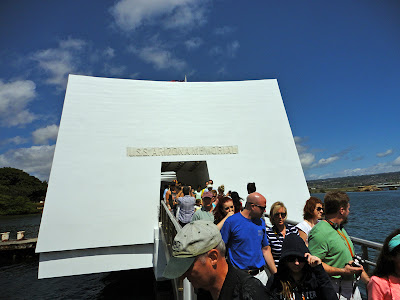 The monument was built right over the ship that still lays at the bottom of the sea.  It was a very moving experience. 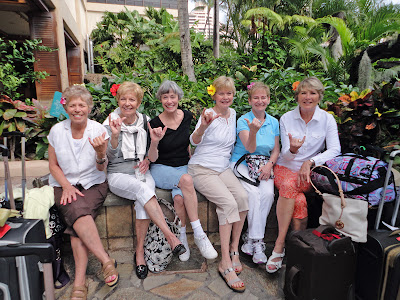 And here we are with our bags ready to fly to Maui.  The sign we are all making with our hands is seen all over the islands.  It means "hang loose". Where else but in Hawaii can you wear a flower in your hair and not look ridiculous?

Tomorrow is Easter and I'll be at my niece's again.  This time there will be two new babies to meet.  That will have to interrupt my travelogue, but I will get back with pictures from Maui next week.
Posted by Norma Schlager at 3:10 PM 2 comments:

For the last couple of years a group of us have gone away for the whole month of March; two years ago to Arizona, last year to Florida and this year it was 2 1/2 weeks in Hawaii.  It's so good to get away at this time of the year when we are really sick of winter.  This year was a particularly nasty March that didn't want to let go of the snow and cold, so it was wonderful to be in a place that has such mellow weather.
Three of the same get-away group and three new additions made it six this year. Within the group there were two sets of sisters: Ruthie and me,  Marilyn and Chris. 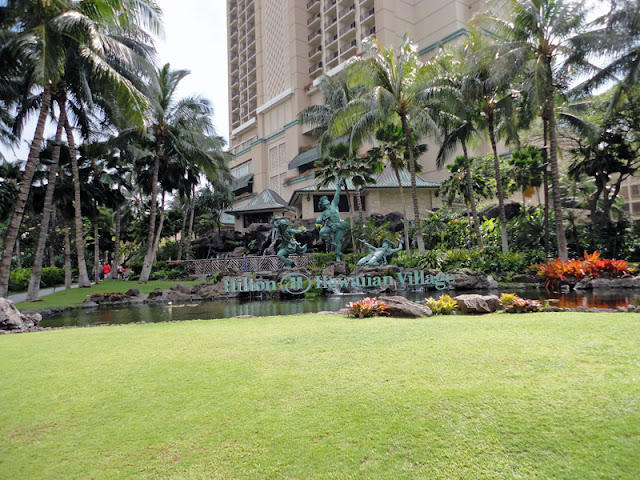 We spent three nights at the Hawaiian Village Hilton, the largest Hilton in the world.  It was a huge complex, consisting of many "towers" and several shops and restaurants.   It was right on the beach and centrally located, making it easy to walk to many places of interest. 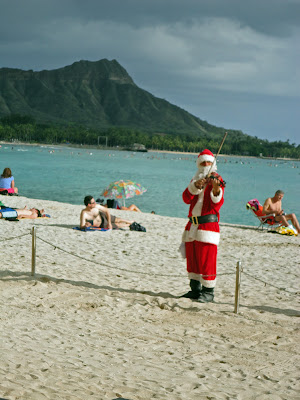 You never knew what you might see on the beach, but we were all surprised to see this skinny Santa playing the fiddle. 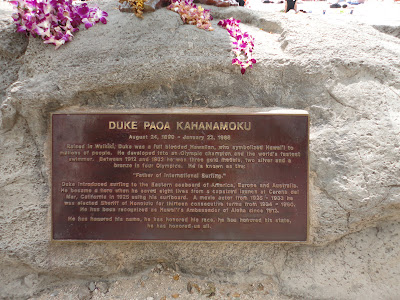 All over town there was mention of and tribute to Duke, the famous gold medal swimming winner of the Olympics and also called the Father of Surfing (read the plaque for more interesting facts.) We had dinner one night at the fabulous restaurant bearing his name. 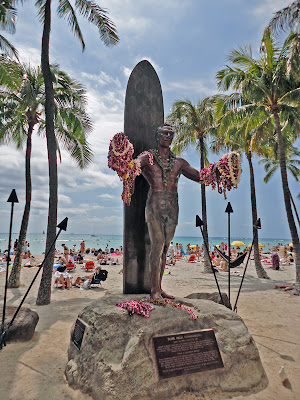 His statue at the beach was always draped with leis.


This is just the beginning.  Please come back for more.


Posted by Norma Schlager at 5:22 PM No comments:

If you follow my blog at all, you must have figured out that if I haven't posted for so long that I must be away. You were right!  I spent two and a half weeks in the beautiful state of Hawaii. I arrived home this morning after a very long day and night of traveling, two flights, the last one being 9 1/2 hours.  We arrived in New York at 6:30 AM, which was really about 1AM Hawaiian time and I never sleep on the plane.  Needless to say I am exhausted.  I had to run to the store as soon as I got to my house since I had no food in the larder.  I went thru my gazillion emails, the snail mail, unpacked, did some laundry, etc., etc.  Now I'm ready to try and watch a couple of my saved TV programs and then hit the sack.

I promise to write some more and give you the highlights of the trip. It was fabulous.  Here are just a couple of photos to whet your appetite. 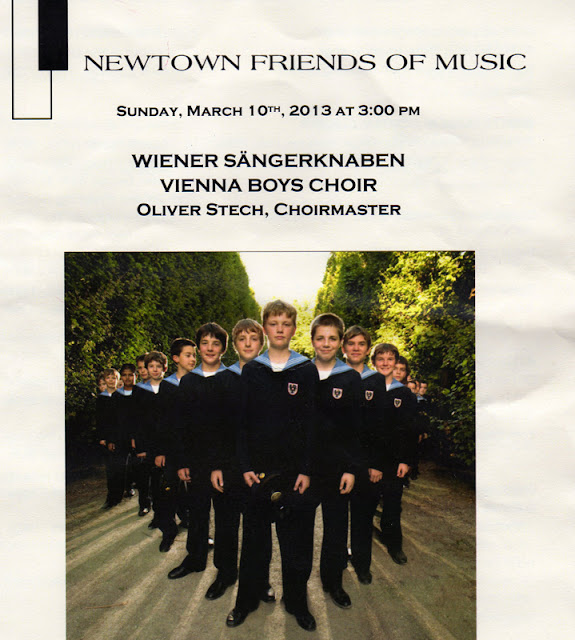 I spent a delightful afternoon at a concert of this terrific group of young boys.  They are touring in the US for four weeks and this their only appearance in CT. How lucky for me that it was in my neighboring town of Newtown.  I had seen them about twelve years ago and thoroughly enjoyed seeing and hearing them again.


Posted by Norma Schlager at 6:51 PM No comments:

I was hoping to post today about the Kumihimo-with-beading workshop that I was to attend this morning. But like the workshop that got cancelled last month, this one, too, was cancelled because of all that white stuff falling outside. We thought we would be safe in March.  This is New England; what were we thinking?  So now we'll have to wait until April.  It couldn't possible snow them.  Could it.......?? 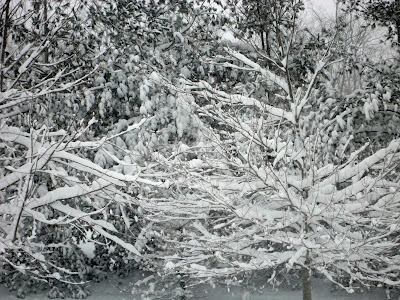 I do what I do because I love it, but it's always nice to know that someone else likes it enough to accept it into a juried show, or give it an award, or even buy it.  I've had some nice validations recently.

The CT group of SAQA is going to have a traveling show, Local Color, that will debut for the first time at the Ruth Hass Library at Western CT State College in Danbury, in May.  The show will travel for two or three years and will be at several venues throughout CT.  You can read about it here.  It is a juried show and you could enter up to three pieces. We had discussed the show last year at one of our regional SAQA meetings and everyone agreed that it was a great idea, but the entries were slow in coming.  We needed at least 50 pieces to put on a show. Well, in the last two days people stepped up and there were over 90 entries. I had assumed that everyone who entered would have at least one piece in the show, but I was wrong.  I know of two people whose work I greatly admire have all three pieces declined.  I was very surprised, so I was extra pleased when they accepted two of the three that I entered.

These are not new pieces and you have seen them before, but here they are:


Next, I had blogged before about the Arts and Crafts Competition for Woman's Club and showed some of the things I had made.  These all had to have been made within the last year.  I entered 6 items and won 4 first place and 2 second place. One of the second places was a second to my first, since I had entered two things in the same category.  The first place winners will go on the the District Day competition, to compete with the winners from the rest of the clubs in the district. If you're really interested you can scroll back and see my silk evening purse, the purse I made out of a recycled sweater, my Itajime Shibori quilt, my bead cluster necklace, and there were two fabric postcards that I forgot to photograph.


Next I had showed you a small quilt that I had made for our guild's "Black and White and One Color" challenge.  They had an overwhelming response with 54 entrants.  We usually only get about 30 or less, even though we are a large club.  I guess this appealed to a lot of people.  They were separated into two categories: contemporary, of which there were 37 entires and traditional, of which there were 17 entires. It was viewers choice and you got two votes in each category  It was so hard to choose.  The contemporary quilts were especially fabulous.  It really was so hard to vote for just two.  So I was surprised and delighted to get a third place. The committee had made the cutest ribbons with black and white polka dots and stripes and the color of the ribbon. The quilts will be displayed with their ribbons at our big quilt show in May.


And lastly someone emailed me to tell me that she had purchased one of my small quilts on display at the Katonah Museum of Art.  They are currently having an exhibit that will run to June 16, called Beyond the Bed: The American Quilt Experience.  To quote the brochure, "The quilts on display illustrate a variety of techniques (whole cloth, pieced, applique) and traditional designs (album, log cabin, crazy, pictorial) representing diverse cultural styles and geographic areas (New England, Amish, Gee's Bend)."
Our guild was invited to make small quilts that would be mounted on 6" x 6" artists canvas.  You could make up to three and I made two.  They are to be sold right off the wall and replaced as they sell. I'm not sure which one sold, but here is a picture of my "Green Ginkoes". 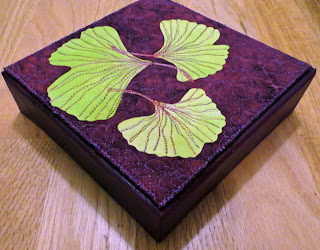 So all in all it's been a good couple of weeks and it spurs me on to keep on going.
Posted by Norma Schlager at 5:33 PM 6 comments: 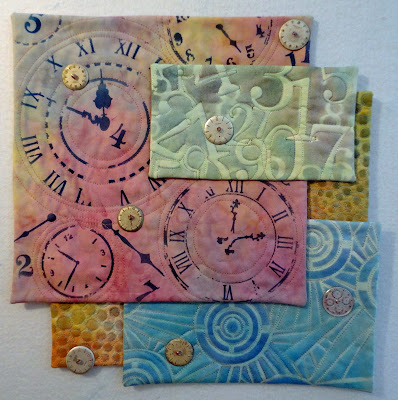 Yes, this is the same piece I showed you yesterday, with one little tweak.  If you look at yesterday's photo you will see a larger-than-the-rest white watch face on the pinkish fabric. I had this on my design wall and every time I walked into the room that white face jumped out at me.  It was incompatible with the other faces.  I took it off and tried to tone it down with alcohol inks, but it still didn't look right, so I replaced it with a smaller older looking one.  Much better, don't you think?
Posted by Norma Schlager at 2:52 PM 4 comments:

Are you wondering where I've been?  I had a family emergency that called me out of town for a few days (all is fine now) and I've been busy and I also didn't have anything to post.

A couple of posts ago I showed you a piece that I had made for a FANE show at the Mahopac Museum in April. I liked it but I wasn't sure if it was right for this show it and I had another one in mind.  So I finished my second try and showed both to my quilt group yesterday to see which they liked best. They overwhelmingly gave my second one the thumbs up and here it is. 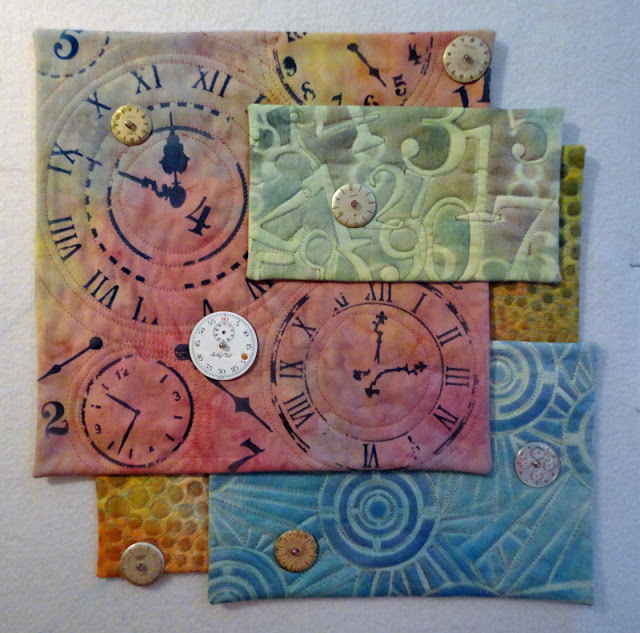 The guidelines for this show are thus:  It has to be inspired by lines in poetry or a song, it has to be made of more than one component, it must fit within a 14" square and it will be mounted on an 18" white artist's canvas.

I started out with four of my snow-dyed fabrics and stenciled them with Shiva paint sticks using some commercial stencils I had picked up that showed clocks, numbers and what I thought looked liked gears. I had purchased some antique watch faces a few years ago and they all screamed to be put together. I outlined all the elements with free-motion quilting and made each piece into a little faced quilt then tacked them together with tiny stitches. The clock faces were put on using a single seed bead through the center hole.

My poem is To Time by Lord Byron and the lines I chose are:
Time! on whose arbitrary wing
The varying hours flag or fly

My first piece, a little underwater triptych, will be donated to the silent auction at my quilt guild's quilt show in May.  I think it is a good choice for that.
Posted by Norma Schlager at 3:33 PM 4 comments: