Still working on my jacket. This will be a long term project. I only completed two circles this week.

I am linking up with Nina Marie's Off the Wall Friday.

Knowing that I would be in Florida for three months and knowing that I would not have a machine and all the other goodies in my home studio, I thought I would do a lot of hand work. I did do a couple of small pieces for my FiberWork group and  I was pleased with those results. I had looked at a lot of "modern" embroidery on Pinterest and looked forward to doing those. I tried two and they were both big flops and I gave up on them before I went too far.

Then I remembered how much I enjoyed working on a denim jeans jacket. a couple of years ago. I did an original paisley design on the front and back. I loved working on it and I loved the results. You can see it all here.

I follow Linda McLoughlin's blog and admire her tenacity and talent as she shares her daily and weekly art. One of her recent projects is embroidering different circles over a period of time on a vintage napkin. See her fabulous work here.

So with Linda's permission to borrow her idea, I started this week on a white jeans jacket with circular designs,  doing different embroidery stitches in each one. I started with the basics....running stitch, chainstitch, French knots, and button hole. I will keep adding circles as I go along, filling it in  and will do a little seed stitch in the background. I love how you can go to YouTube and learn how to do anything, including all those embroidery stitches. 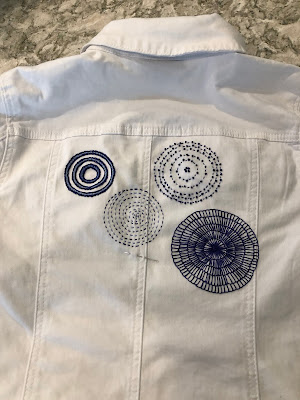 I will show you my progress as I go along. Please come back. I am linking up with Off the Wall Friday.

It seems like forever since I have blogged, but there hasn't been much to show since I have been in Florida. I haven't done all the handwork that I thought I would be doing, more about that in another post, but I do have news to share.

They used another of my suns this morning on CBS Sunday Morning today after a segment about Test Kitchen, a program I have often watched. Fortunately I decided to check my emails before going to bed last night, after a long day out and company in the evening. And there was a lovely email from Jessica Frank, the person in charge of picking the suns, telling me that mine would be used for that segment. Of course I watched and recorded it, as I always do.

This is how it looked on the screen, cropped to fit the screen. Part of the segment was about a roasted carrot recipe, so this was quite appropriate, even if my carrots got chopped off.

This is the picture I sent them. It was an experiment in using natural dyes, such as blackberries, beets, tea, spinach and carrots. The only one that was really successful was turmeric, which gave me a brilliant yellow for the face. I enhanced the others with markers.

This is the fourth of my suns that they have used on the show. I sent them pictures of eight.

A little late in the weekend, but I am linking up with Off the Wall Friday.