For this month's challenge our group decided to have everyone use the same prompt......make something in the Impressionistic style. I knew right away that I wanted to use paint and Pointillism, using either a pencil eraser or a small brush for my dots. While it was fun to do using a small stiff stencil brush and I thought I liked it close up, when I put it on my design wall and saw it from a distance, I wasn't so sure. 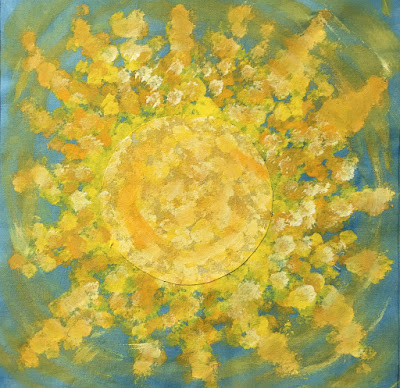 So, I made one with just stitching, going round and round with a variegated thread, hoping for a shimmery effect. 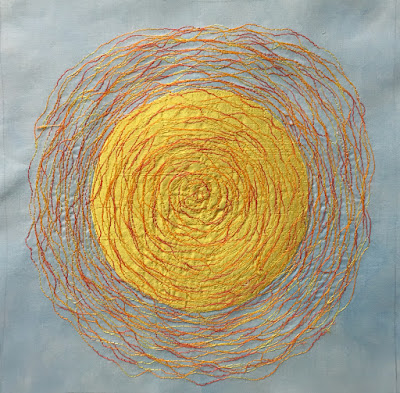 Still not sure if I liked it. Maybe the thread was too dark, so I proceeded to do a third, using a lighter
color variegated thread and a darker fabric for the background. 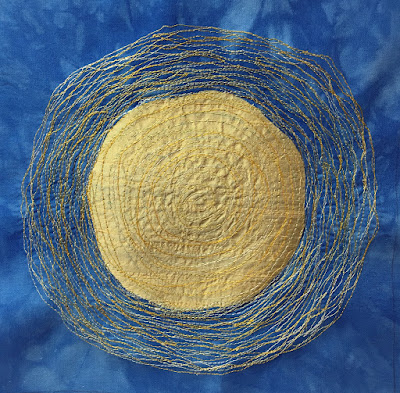 Hmph! Think I like the second one better. Also, even though I backed each stitched piece with a soak-away stabilizer, there was still some distortion.

So, what do you think? Do any of them bring Impressionism to mind? Have I completely mixed the mark?

I am linking up with Off the Wall Friday. Please go check it out.
Posted by Norma Schlager at 5:06 PM 6 comments:

A few people have said that they missed my "Wordless Wednesdays" in which I would post a picture that I had taken of something pretty in nature or interesting at a museum or other things and no words. I don't know why I stopped but thought I would take it up again. This is not the time of the year to be taking good pictures outside, so I thought I would offer some things from my photo library or maybe some quilts that you may not have seen.
This first one is closeup of the beautiful bouquet of orchids sent to me by my son for my recent birthday. They really were that incredible color. After this post......no words on Wednesdays. 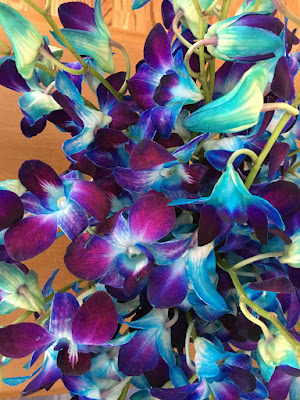 Posted by Norma Schlager at 6:00 AM No comments:

One of the fiber groups of which I am a member puts on a special exhibit at the big annual guild show in the spring. The exhibits have always been three dimensional. We have made kimono shaped pieces on T-shaped wooden forms, hung totems from the ceiling, made 12" cubes covered in fabric, hung fiber falls from metal racks. This year we purchased heavy black poster boards 15" x 20". Jane, our fearless leader, cut two three inch slits on each side.
They are to be covered with surface design fabric on both sides and then they will be stacked together like a house of cards.
I finished my pieces this week. I started each with a piece of hand dyed, parfait dyed, or ice dyed fabric. Then I used stencils or rubbing plates and Shiva Paint Sticks. 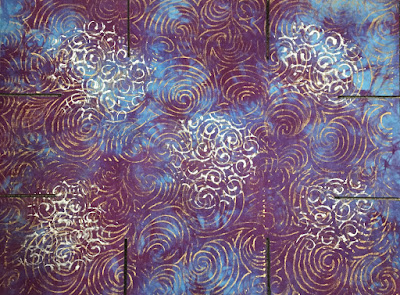 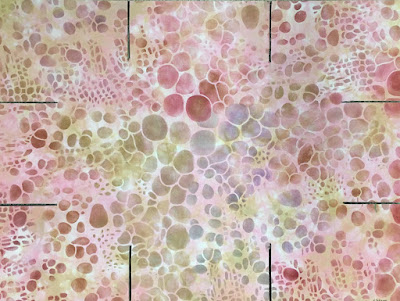 This one uses one stencil that I moved around and changed the colors of the paint sticks. 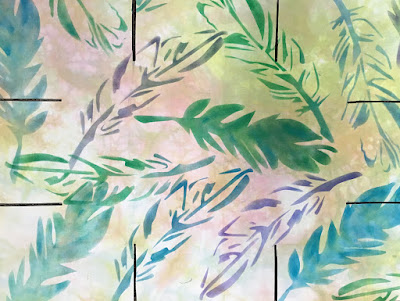 This also uses one stencil moved around and different color paint sticks. 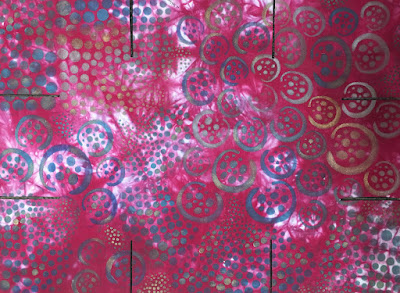 Here I used two different stencils, one with those big shapes that look somewhat like dried lotus blossoms and one with tiny circles. 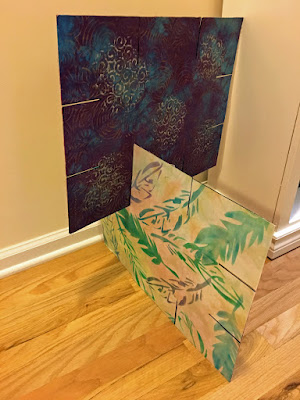 It was hard to get just two of them to stack, but you get the idea. I think there are about 25 of the group participating, which would make 50 pieces, so it should be very interesting. At out last meeting we did a lot of brainstorming to come up with a name, the winner was Architextile.

I'll be sure to show you pictures from the show, but that's a long way off.

I'm linking up with Off the Wall Friday.
Posted by Norma Schlager at 5:17 PM 3 comments:

About 20 ago I saw this quilt in Quilter's Newsletter Magazine and fell in love with it. It was a paper pieced pattern for a queen sized bed, which I had in my former house, named Luscious Lilies. I now have a double bed in this house. It involved a LOT of piecing, 25 pieced blocks for the center, plus dead blocks with no piecing. A triple border, the inner one with a gazillion green half square triangles, a middle border with lots of pieced lilies and an outer border with a gazillion more of those little half square triangles. It took so long that I renamed it Languishing Lilies. Then I marked all the dead blocks, using a stencil with a #2 pencil (more on that later)

I hand basted it and proceeded to hand quilt it, which I used to be very good at. The background fabric is a white on white, which is basically paint on white and very difficult to hand quilt through. I only quilted four blocks. Then I had elbow surgery and could no longer hand quilt without a lot of pain. Maybe that's what put my elbow over the edge in the first place.

Sooooooo, it has been folded up on the top shelf of my studio closet. I couldn't send it out to be machine quilted because I had already basted it and had done some hand quilting. I didn't want to spend a fortune having someone finish the hand quilting.

Last Friday one of the members of my weekly group, FiberWorks, showed a large quilt top that she had pieced several years ago and now was going to finish and quilt on her Sweet Sixteen. A light bulb went off in my head. Why had I never thought of that? I have a Sweet Sixteen that I have used very little. It's like the little girl with a curl right in the middle of her forehead.....when she was good she was very, very good and when she was bad she was horrid. I have so much trouble with the machine with getting the tension right and not having the thread break. After a LOT of fiddling and watching videos, I finally got it going. It did not get tangled up in the hand basting, as I had feared and it looked pretty good.

I quilted and quilted and quilted.....on and off for most of the week.  Hooray!! I have finished the inner part of the quilt, the inner border and have started on the middle border. It is far from perfect and it will never go in a show, but I think it will look pretty on my bed with a little redecorating to have it fit in. 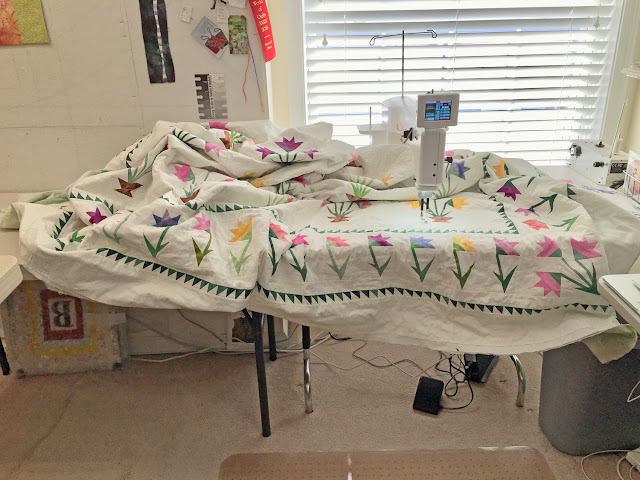 I have an extension table to the right of the machine and brought in another four foot folding table for the left to support all the weight of the quilt. Works perfectly. The great part of the Sweet Sixteen is having all that room in the harp. No need to roll up the quilt and throw it over your shoulder as you would with a regular home sewing machine. I just smooth out one block at a time and quilt. 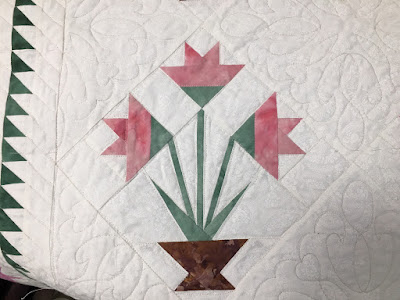 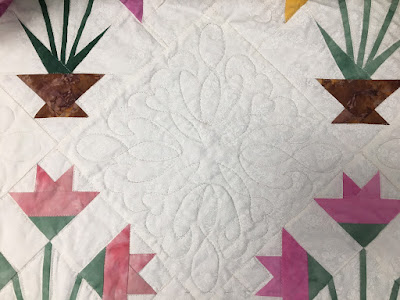 As I said before, I had marked the quilting design with a #2 pencil, a little too dark and it shows, especially if I have strayed off the line. I am going to try to remove it with a formula I found.....3/4 cup of rubbing alcohol, a few drops of dishwashing detergent and 1/4 cup of water. If anyone knows of a better solution, please let me know. 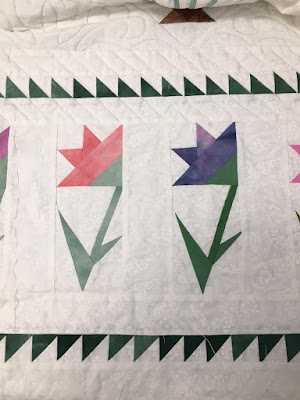 Part of the borders. See what I mean about all those little half square triangles. I will quilt on it some more this week, but I also have a couple of other deadlines to meet.

How about  you? Have you resurrected a UFO recently?

I'm linking up with Off the Wall Friday. Please go see what some talented artists are up to.
Posted by Norma Schlager at 2:46 PM 7 comments:

to me!  Today is my birthday and I spent it with my sister and three other friends in NYC. The Russian Tea Room, a New York City institution, has been on my bucket list, so I can check that off. We went for brunch and I had borscht. Every restaurant we went to in Russia had their own version and this was different, too, but so delicious. It came with a pierogi and sour cream. For dessert I had their famous cherry cheese blintzes with vanilla ice cream, equally delish, accompanied by wine and cappuccino. 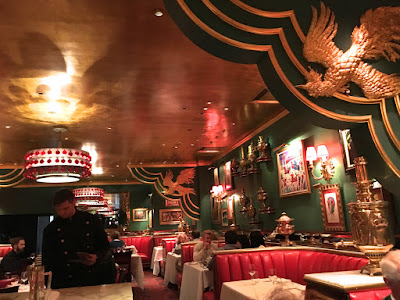 After brunch we went right down the street to a Downton Abbey exhibit. We were all diehard fans and were so sorry to see it go. I did not miss one episode, thanks to DVR. It was so well done with talking holograms, room setups, lots of the clothes, those magnificent clothes, and little videos all over. The first floor was the kitchen and the help quarters, second floor was the "upstairs" and the third floor was all costumes. We thoroughly enjoyed ourselves. I forgot to take any pictures and so I snapped this one on the way out in the lobby. 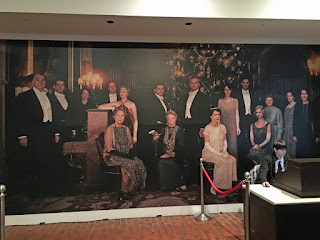 I had so much fun stamping all those t-shirts that I made for the Woman's Club Conservation sale that I decided to make a shirt for myself, but not a t-shirt. I bought this very nice no-iron white cotton shirt on Amazon. I like the fitted style and the no-iron look, so very crisp. I used my favorite ginkgo stamp, four different ink pads and emphasized all the lines with permanent markers. 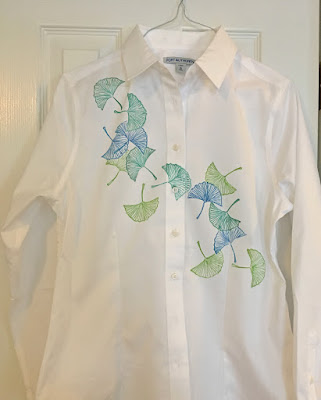 Be sure to click on the picture for a bigger view. I'm linking up with Off the Wall Friday.
Posted by Norma Schlager at 9:22 AM 6 comments: