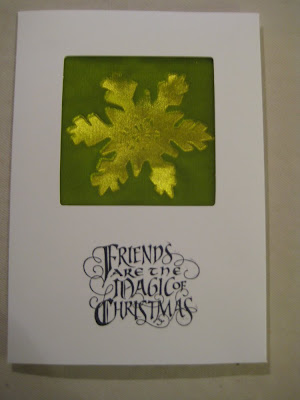 I made some of my Christmas cards this year, 32, to be exact. I used the embossed velvet I blogged about here and two different stamps, depending on whether they were for friends or family. They were difficult to photograph because I couldn't pin them up on my design wall so I had to shoot them from above while they were flat on the table.
I got the card blanks from cardblanks.com and they were just what I needed with a three inch opening for the velvet. They were harder to make than you might think, since I was working from the back and the velvet was slippery and slithery. I don't think I got one of them in the right way on the first try. Sometimes it took two or three tries. They all got mailed out earlier in the week. I hope this doesn't sound terrible, but I only sent them to people who I thought would appreciate them. The rest got some very pretty store bought cards. I sent out about 75 cards altogether. 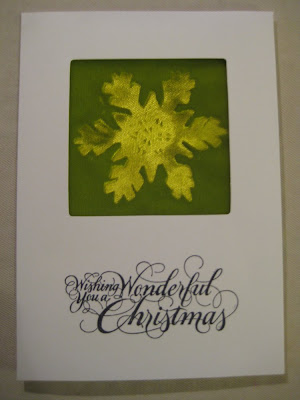 Wishing you all a very Merry Christmas and a Happy New Year!
Posted by Norma Schlager at 12:30 PM

Hi!
There is a Ugg boots giveaway running.
To participate go to my blog and click the link on the post "Ugg Boot giveaway"!

Oh Norma, they're gorgeous! I'm sure that whoever gets one will be thrilled.

HI Aunt Norma, I loved your card, thank you! You always make everything special! I read your blog and i was so happy that everyone was together for Christmas, I loved the pictures! Thank you for sharing! HAPPY NEW YEAR And we plan to see you in 2010! Love from All, Nancy, Pat, Patrick and Stephen xoxoxo