I wrote yesterday that one of the eggs in the nest on my front door was falling out and I put it back. I looked later in the day and it was out again and I put it back again. This morning it was out again and I figured that Mama bird did not want this egg in her nest. I very carefully removed it and as I attempted to carry it away it crumbled in my fingers. It was all dried out inside, so she knew what she was doing when she tossed it out. Isn't it amazing that she knew it was not a good egg? 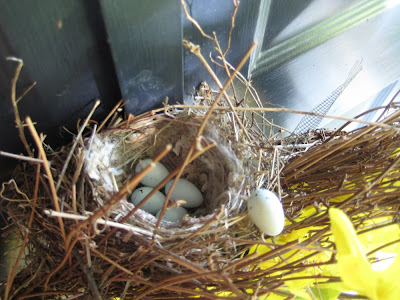 The tossed egg looks bigger than the rest, but it's not. It's just closer to the camera.

So far there are just four Robin's eggs in the nest in the tree, too.
Posted by Norma Schlager at 8:33 PM