I had fun using some new-to-me techniques, namely alcohol inks on Yupo Paper. It is actually a synthetic paper that works perfectly with these inks because it is nonabsorbent and you can really play with moving the inks around to form new patterns. The hard part is knowing when to stop. There are numerous videos on YouTube.

One of my fiber groups, FANE, made several of these 4" x 12" boards. I can't remember what the boards are called, but they are a hard smooth surface on a wooden frame. Perfect for gluing things down.  I was away away in the winter when they were being purchased so at the last meeting when I saw the cool things people were doing I took one board home. Now I wish I had taken more.We could do anything we wanted and some people used fabric, but mine is all paper, metal, and buttons. I should have shown you the two different Yupo papers I used before I cut them up. They are both in shades of blue and green, but one is a denser pattern than the other. I also used some pieces of metal that I had embossed on my embossing machine and then treated with alcohol inks. I used sections of a tree die cut and some buttons from my stash. Click on the picture for a bigger view.

Below are three other Yupo papers in different colors and patterns. I'm hoping that they will find a way into my cards or other collages.
The sheets that I purchased are 5" x 7", but it comes in several sizes. It is rather pricey, so from now on I will use one of those great 50% off coupons from Michael's. 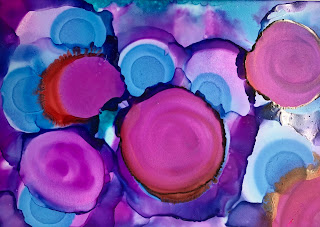 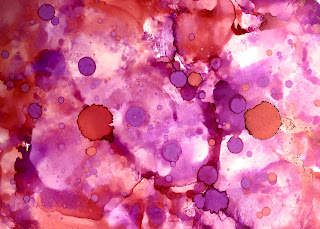 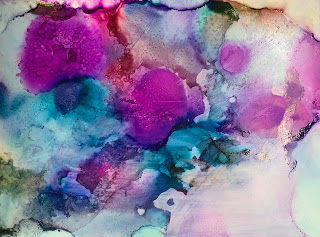 I am linking up with Off the Wall Friday.

Yupo paper is magic, isn't it? I need to buy some. Your effects are lovely.

Always inspirational always learning!
Any tips you would be willing to share on stitching through printed images?? LeeAnna

Now I want to play, I happen to have some Yupo and alcohol inks. I did try it several years ago and wasn't happy with my results, but I love yours.