I know that I have been delinquent in attending to my blog, but I have been away. I took a ten day trip with a group of Woman's Club members to the lesser known and visited cites and towns in Spain and Portugal. It was called "The Spain that Nobody Knows". We few into Madrid and then traveled west from there to visit Salamanca, a lovely University city, Alba de Tomes, Miranda del Castanar, Trujillo, Caceres, Marveo and Castelo de Vide in Portugal, Merida, Guadalupe, Puente del Arzobispo, Largartera, and back to Madrid. My son spent 3 months traipsing around Spain on his own after Law School and he had only been to one of these cities, other than Madrid.

There were just 17 of us on the tour and we had a wonderful time being together. Our trip was led by one of our members, Barbara, who has been a Spanish teacher for over 35 years and of course spoke fluent Spanish. It was great having her with us. We did have local guides for some of the towns and cities.

The weather was surprisingly cool and rainy for the first few days and we were all wearing sweaters, jackets, and raincoats, not the summer clothes that we had brought the most of. The last two days it did finally warm up and was the Spainish weather that we had expected.

We did a LOT of walking and a LOT of it was up and down treacherous cobblestone streets in hilltop villages. I don't mind walking uphill, but I have a mental thing about going down. I'm always thinking I am going to lose my balance and go tumbling down like Jack and Jill. So that part was not good for me.

We did see some beautiful scenery and I will show some here, but will not try to identify all of it. I didn't take notes and, let's face it, a lot of these towns start to look alike after awhile. 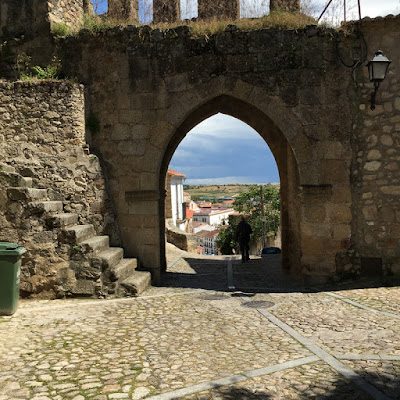 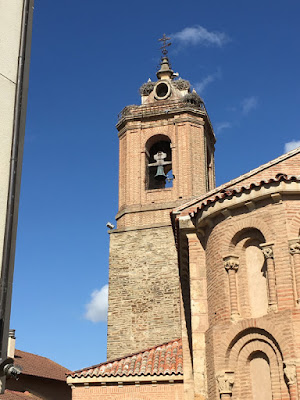 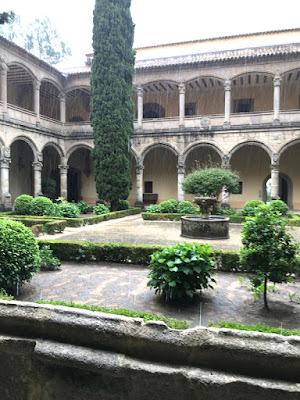 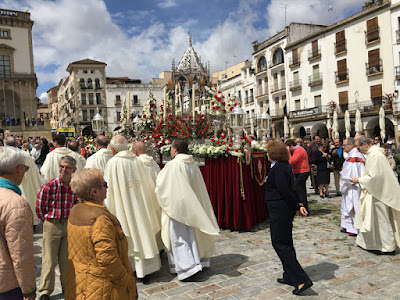 We were fortunate to be in one small town on the feast of Christ the King and there was a wonderful procession through the town going from one church to the town plaza where there was choir singing. Spain is a very Catholic country. 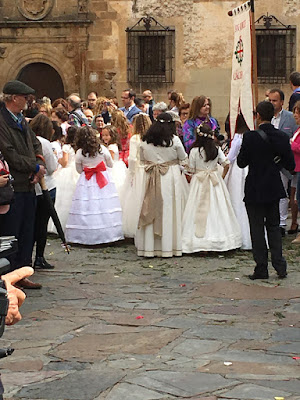 All the children who had made their first Communion that year walked in the procession. They were so cute, with the girls mostly in long dresses and the boys in suits and sailor suits and even one dressed as a general, complete with fringed epaulets. I did get some good videos of them facing me. 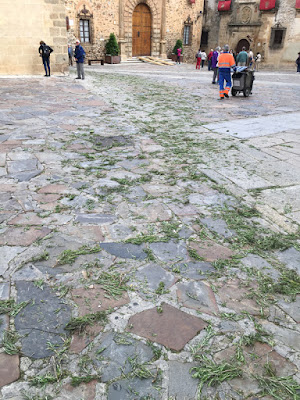 The streets were strewn with fresh Rosemary apparently to enhance the experience. Here they are afterward sweeping up. I wonder what they did with that much rosemary. Did they feed it to the pigs?
We did eat a lot of pork, including the famous Imberico Jamon, very expensive in this country but plentiful over there.

I usually plant my gardens in mid-May, but did not this year because of the trip, so now I am heavily involved with planting. Another excuse for my blog absence. I promise to come back in the next couple of days with more pictures of my trip.
Posted by Norma Schlager at 6:01 PM

I've just scrolled through all your Spain posts and pictures. Thank you! Absolutely gorgeous. So wonderful to see parts of the country that aren't usually on the tourist itinerary.