Several years ago I was buying every striated batik I saw.  I'm not sure why.  I guess I just liked them and also thought that they would be good in landscape quilts, something I don't do very often or maybe I was thinking of using them instead of pieced strips or stripes in a quilt.  But other than using a little bit for the backgrounds of some ginkgo postcards, they have mostly been sitting there, neatly folded in three plastic shoeboxes labeled "striated batiks".

I wanted to make a somewhat large quilt to practice with my mostly unused Sweet Sixteen, so I got out the boxes and and started pulling out fabrics.  I found a favorite that had two pieces (I probably bought one and then forgot that I had it and bought another).

The label on this one said "Georgia's Poppies", probably a reference to Georgia O'Keefe. I thought the colors were yummy. 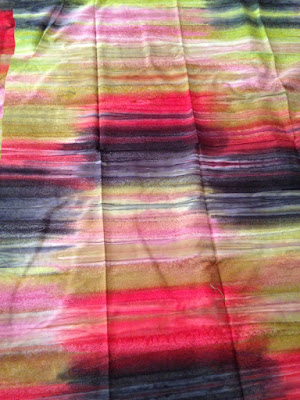 I proceeded to cut it up in 6 inch wide strips and then cut those into 6 inch squares. 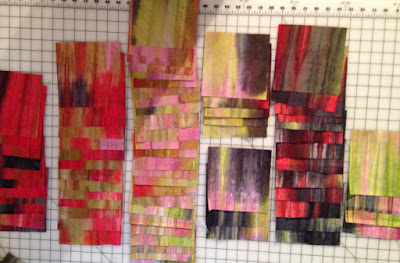 Then  I separated them into similar colors and started placing them on my design wall from the center out. 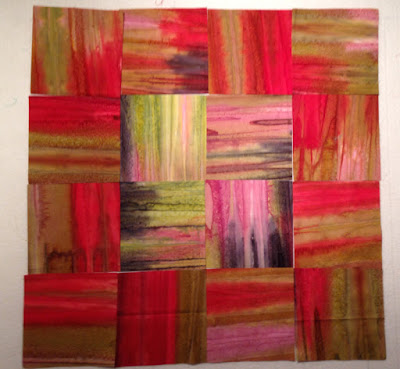 So far, so good.  then I added another round. 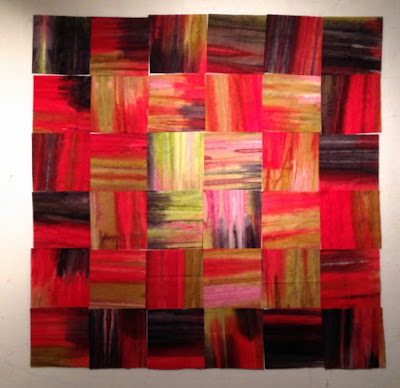 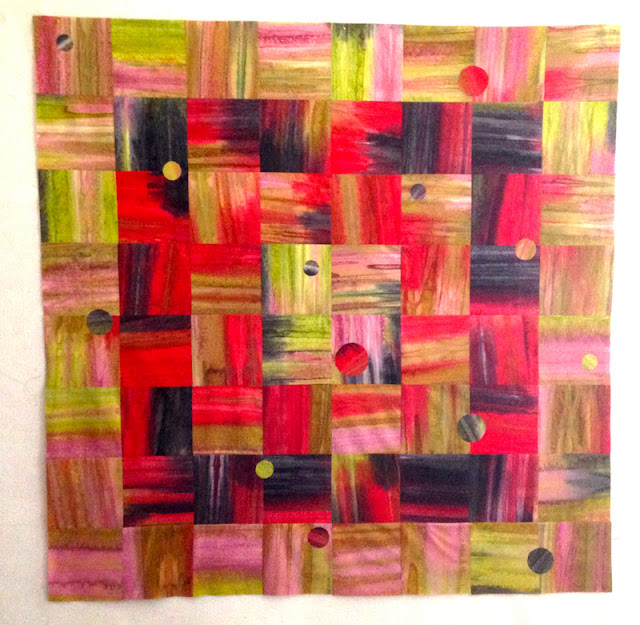 Here is the finished piece with floating circles fused on.  You might recognize this as the same format as my Fiesta quilt that I blogged about here. I guess you could say that this is another Rail Fence variation with printed strips instead of pieced.

I think I am going to quilt it by just following the striations.  I'm linking up again with Off the Wall Friday.
Posted by Norma Schlager at 6:00 AM

WOW oh Wow.....what a great way to utilize what I think of as difficult to use fabric!!! Perfect!

Those striated batiks--sooooo hard to resist! This is one of the best uses for them that I have seen. Brilliant!

for me, it's all about the circles...

That fabric really does all the work.

I have a bunch of multicolored prints and many batiks that I bought for the same reason as you suggest, the sort of vague, oh that would be good in a landscape kind of reasoning. Now I find I never use them, but the glowing color arrangement and stripey feel in your piece makes me think I should pull them out!

Wonderful! And so you! I can't believe you don't use your sweet 16 - I use mine a lot and love it.

I admit I don't shop much, and have not seen the striated batiks. But they are great for the "rail fence effect." BTW, I love your quilt in Kathy Loomis' new book.

I agree with Lee Anna, above ... the fabric is great, but the circles really "make" the quilt, so lively and exciting!