Button, button, who's got the button?

Me!  Let me explain.....
Each year the art quilt group of my big guild, Northern Star Quilter's Guild, has a special exhibit at the guild's annual show at the end of May.  This year the challenge is rather unique.  We are each to make a 12" square with a yellow path running through it.  The path has to be one inch at its entrance and one inch at its exit, but it can do anything within the block.  It can zig-zag, be straight or wavy, fat or skinny. It must not exit on the same side it entered. There can be no right side up and they will all be joined by the paths. The background can be any color.

I don't know why, but I almost immediately thought of buttons and beads.  I've always wanted to do a small encrusted piece and this was the perfect opportunity.

I used a piece of Peltex, a very firm interfacing and fused a yellow path and then painted the rest of the square in an ombre from dark red, to red, to dark pink to light pink.

I had some buttons and I dyed and painted a few, but mostly I purchased collections.  I also won two jars of buttons at a SAQA regional meeting, one pink and one red, and that was the incentive for my color scheme. I am being really crazy and am sewing each button and bead on by hand.  I know that I could have glued them, but that seemed like cheating.

I should have taken a picture before I started buttoning, but you get the idea.  Here I am working on the yellow path with all my yellow buttons spread out. It works great on my kitchen table with a table cloth and the buttons don't slide all around.  I'm using a beading tray for the beads.

Some closeups of the buttons.  It really is fun seeing all the variety.  I was pleasantly surprised to see that there was such diversity in the purchased packets, some from online and some from Joanne's.
Wherever there is a gap between the buttons, I fill in with beads.

Now the yellow path is done and I'm starting to fill in with dark reds along the path. 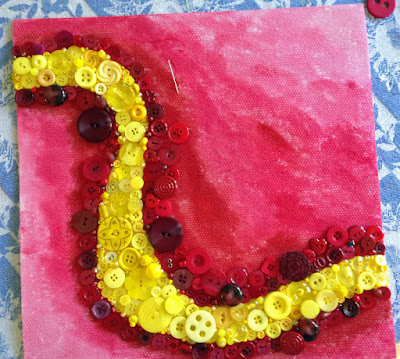 Here is where I am today, starting to blend in the brighter reds.

It's a pretty insane project and it's already starting to get heavy, which is why I put it on the Peltex. I will post some pictures as I progress. I hate to sew buttons on a blouse, shirt, etc, but this is fun.

Remember to click on any picture for a bigger view.

I'm linking up again with Off the Wall Friday.

Posted by Norma Schlager at 3:40 PM

Wow, great idea, I love it! It does look fun!

I've done three pieces with buttons, a black circle, a white circle and one all red piece. Seeing yours reminds me how much fun I had doing them, maybe it's time for another one. I really like that bright yellow.

Looks great! I love the way you used the buttons!

Oh, this is great! Would you lien me to send you some buttons?