This summer I went to a Surface Design Association meeting at Anita Balkun's home.  On the refreshment table she had a large sampling of the scrumptious ice dyed napkins that she had made for her son's wedding, 145, I think. They were not ironed and so had this lovely soft hand to them. She had done them in many shades of dye and each one was different than the rest. 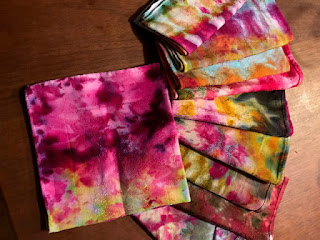 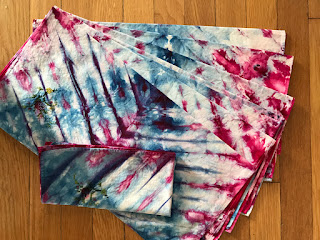 I was so enamored of them and inspired that I decided to make some myself, but I wanted to make them all shibori in the traditional dark blue and white. I went online and ordered several sets of vintage linen napkins on eBay. No two sets were the same size; some were luncheon size and some a generous dinner size. Most sets did not have an even number, they were 5 or 7 or 9 to a set. I also had five large damask napkins from a table cloth I had years ago. It was a large cloth, 120 inches, and I know there were twelve napkins, but I only could find five. Heaven only knows what happened to the rest.

So here is what I did:
This first set was done in the fold and clamp method, using wooden shapes that I had on hand. This was a smaller luncheon size. I steam ironed all the napkins and while they are not stiff as they would be if I had ironed them damp, they had a wonderful soft feel to them, as all of the other napkins do, too. These are all folded. 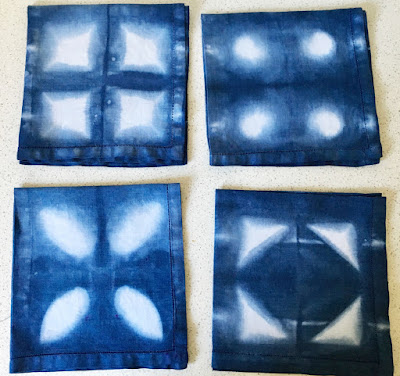 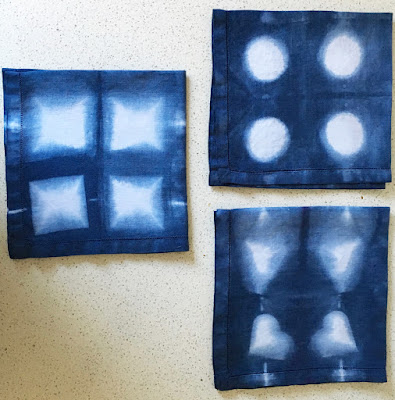 For this next set, I accordion pleated them, using an iron and then held the pleats in place with clothespins. As I was running low on clothes pins, I used fewer on each one and when I ran out of clothespins for the last two I used rubber bands. 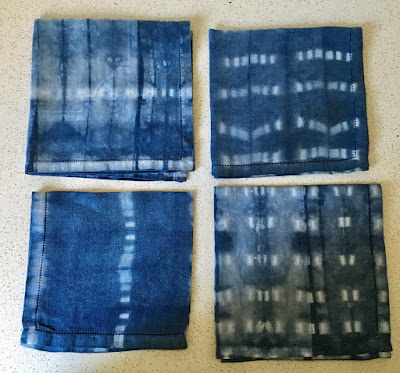 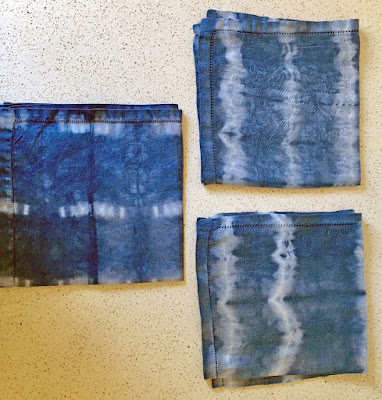 These are beautiful! We use cloth serviettes, too. I will have to consider this idea for some more variety. Wirh only 3 of us, a set of 4 usually has one that hasn't faded as much.
Sandy in the UK

these look amazing, I can see how much fun they were to make! Will they be colour fast when washed? They would make great presents too.

I didn't know that linen takes dye so well. These are beautiful!

We must be thinking along the same wave length, I've collected and dyed vintage napkins for many years. Currently I have a pile in the studio with various resists to dye the next time I do an indigo pot. I never iron mine, I just take them out of the dryer and fold them, guests always comment on the napkins.

I have been using cotton damask for dyeing for some time now, and absolutely love the "glow" that the weave gives to the colour. Now, I'm using some of the dyed damask in pieced hangings, and finding that even using the stuff this way requires very special handling. But, IMHO, the wonderful colours are well worth the extra effort.

Now I covet your Shibori work and will have to give it a try. Love the results.