Back in May my FiberWorks group had an ice dyeing session.  Some of my pieces in one batch looked like little flower gardens.  I always thought that I would do something with them and do some stitching to emphasize the flower look. You can see a couple of photos here.  Then came an invitation to be part of a group of twelve who would use antique quilts to inspire  contemporary quilts at the Windsor Textile and History Museum at an exhibit called Then and Now. My assigned quilt is a very old peony quilt with pink and red flowers appliquéd against a white background. My first thought was to use those ice dyed pieces and that's what I worked on over the Labor Day holiday.

I'll show you more later, including that antique quilt, but for now I have five of the seven pieces finished. Each one is a little quiltlet ranging in size from six inches square to about 7" x 21". They will be attached to a 30" square quilted background to form a collage of sorts and more about that later, too. 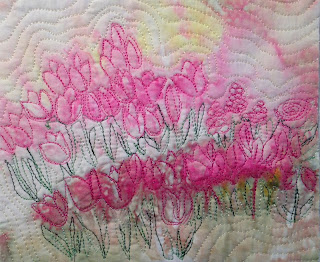 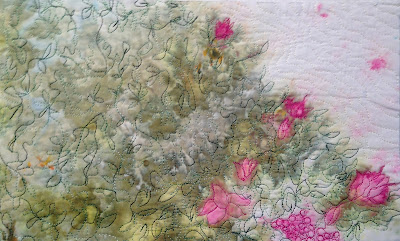 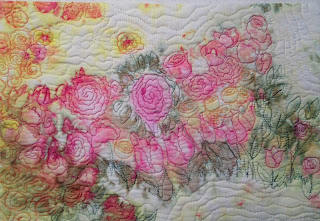 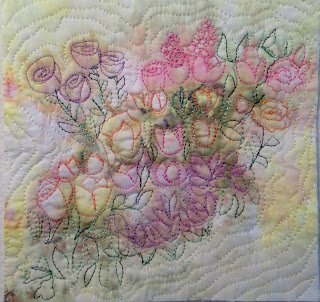 I wish I had taken pictures of pieces before stitching, but I forgot.  I did take before pictures of the two I have left and I will show them when they're finished. I experimented on a scrap and tried different methods of stitching. First I matched the thread to the fabric and that was a big nothing.  You could hardly see where I had stitched.  Then I tried outlining in charcoal gray----interesting, but not the soft look I wanted.  I finally settled on using a much darker version of each color, dark pink on pale pink, orange on yellow, purple on lavender and a variegated green for all the leaves. I liked the effect.  I wasn't trying for realism, but just making doodle flowers to match the shapes made by the dye. I filled in each background with echo quilting in cream colored thread.

I've quilted them using just cotton batting, no backing.  Each small quilt will be buttonhole stitched around the edge with light green thread. I don't want them to have too much bulk since they will be attached to a quilted background.

I've linked up again with Off The Wall Friday.  Go see what some talented people are doing.
Posted by Norma Schlager at 6:00 AM

I love the impressionistic feel to it!

I love your flowers! I am interested in seeing how this project progresses.

These are really lovely! I'll be really interested to see what the antique quilt looks like. The feel of the abstract colors in the background with the defined stitching in front feels very contemporary and yet the soft colors feel like they would meld well with the antique quilt. so pretty!

Oh, the stitching is perfectly suited to the dyed fabric!

This is beautiful! I have never heard of ice dying. I shall have to try it.

terrific vision of what it could be. Sure wish you had a pic before you turned it into this lovely work.
great interpretation Norma
LeeAnna Paylor

Gorgeous!!! And so different from what you usually do.....

Beautiful pieces! I love the soft watercolor look of them. I haven't tried ice dying, must put it on the "to do" list.

Norma, these are wonderful. So soft and defiantly impressionistic looking. Can't wait to see them all.

As you can probably tell by the number of comments, these quilts are very special, truly unique, and just flat out gorgeous!

Absolutely beautiful. It makes me want to pick up a paint brush! How big is it?

What a beautiful ethereal effect - it makes me want to start playing around with dyes.

Many thanks for all your positive comments.I must admit that I had some trepidation about stitching onto those fabrics. The marks made by the dye powders were totally serendipitous and I don't know if they could be duplicated and I certainly didn't want to ruin them. So I appreciate your affirmation. Having said that I am tempted to see if I can do some watercolor effect painting on fabrics and do some more of this type of work.