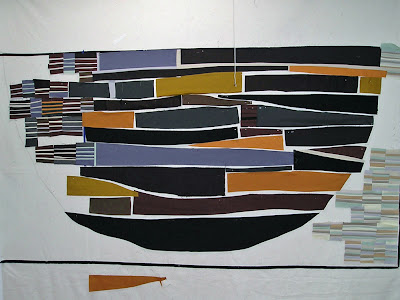 I have been an admirer of Kathy Loomis since I saw her work, Memorial Day, at Quilt National in 2009. It was a huge quilt made out of 4,083 tiny flags, one for each US military killed in Iraq at that time, and won the Quilts Japan Prize for that year. She has been in QN a total of three times, won Best Of Show at Quilt=Art=Quilts at Schweinfurth last year, has been in Art Quilt Elements and SAQA@20 last year. She has taught all over, including Japan. She also has a thoughtful, well-written blog, Art With a Needle, no surprise there since she was a journalist in another life.

I follow her blog and a couple of weeks ago she blogged about a quilt, Brown Planet, that she had started in a week-long Nancy Crow Master class. She started the quilt, pictured above, and didn't have time to finish it in the workshop, so she rolled it up in the white sheet to which it was pinned and put it away, never to be finished. She went to another Nancy Crow workshop and did a similar quilt in blues. I left a comment on her blog saying that I loved the brown version and that if she didn't want it, she could always give it to me. I was just kidding. Much to my great surprise I got an email a couple of days later saying that if I really wanted it, I could have it as long as I would promise to make something out of it and show her the results. It would be a collaboration and the quilt would be mine to keep. I said yes!

I mostly make small or medium sized quilts, no bigger than 60" square and usually much smaller. This one is huge, a whopping eight feet by four feet. It will fill my entire studio design wall. It arrived a few days ago and I unfolded it on my family room floor. She just had one pin in each strip and they had all flopped around. So I went around on my hands and knees and straightened it out and put several pins in each strip. I folded it back up and put it away for now because I won't have time to work on it now, with upcoming trips and other projects to finish. It will involve a lot more piecing, including all those tiny strips on the left hand side and in the background. I'm going to try to follow her plan as closely as possible. Wish me luck!

Please go to Kathy's blog and read all about it here. Be sure to read the comments. Mine is the last one.
Posted by Norma Schlager at 1:37 PM

I like the soft 'echos' in the back ground. I imagine the size is over whelming in person. Good luck with the process. I'm sure your quilting will put it over the top.

I have no doubt that you will add an amazing dimension to this piece and I hope it is a collaberation and not just attempting to finish her vision.

Hi, Norma. I do enjoy your blog. Looks like you'll have your hands full with that collaborative piece, but oh, what a potential. Thanks for showing the Nigerian artist's work--just amazing.
best, nadia

We love her work also, will look forward to seeing what you do with this work-in-progress !

Norma -- thanks for the kind words! I give you permission to take as long as you want to finish this h-u-g-e piece. After all, it's been sitting there for five years already -- a few more won't hure it's feelings.